Over the years, Knowles and his students have performed multiple studies of the solar envelope’s development potential in Los Angeles. These were done on sites with different land values, topographies, street orientations and neighbourhood characteristics in order to test the effectiveness of the envelope over a range of conditions.

All these approaches of density have their shortcomings and are preferably calculated alongside each other in order to make sound comparisons. The size of apartments, the occupancy, the ratio between office space and residential building, and the amount of parking space are among the main factors that can distort density results if only one figure is shown. 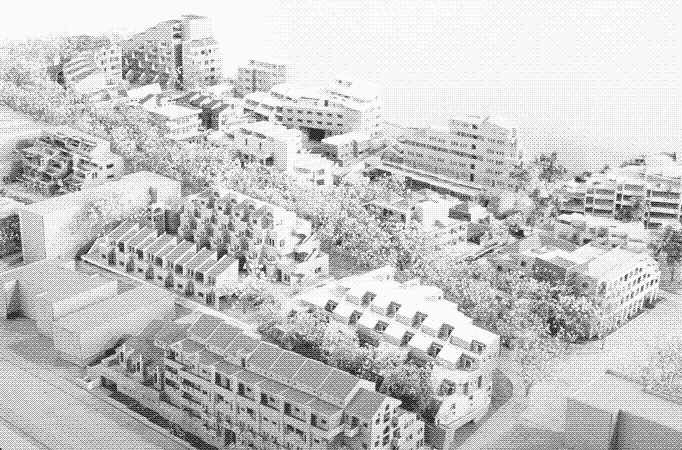 Buildings under the solar envelope on the Spanish grid in LA, reaching densities up to 72 du/ac. Ralph Knowles.

Knowles and his students have reached densities of up to 100 dwelling units per acre (100 du/ac or 247 du/ha) for residential development. If we count on an average of two people per apartment (Knowles does not give occupancy rates), this comes down to 200 people per acre. These figures were obtained on the Spanish grid, with apartments averaging 93 sq m (1000 sq ft), a minimum of 4 hours of sunshine in winter, and a 6.1 meter (20 ft) shadow fence. For mixed use development, Knowles obtains a FAR of up to 7.5.

Of course larger apartments, more demanding cut-off times and lower (or non-existing) shadow fences would reduce the development potential. On the other hand, the density would improve if the project were to be located on a Jeffersonian grid, which boosts development potential (See part 2). 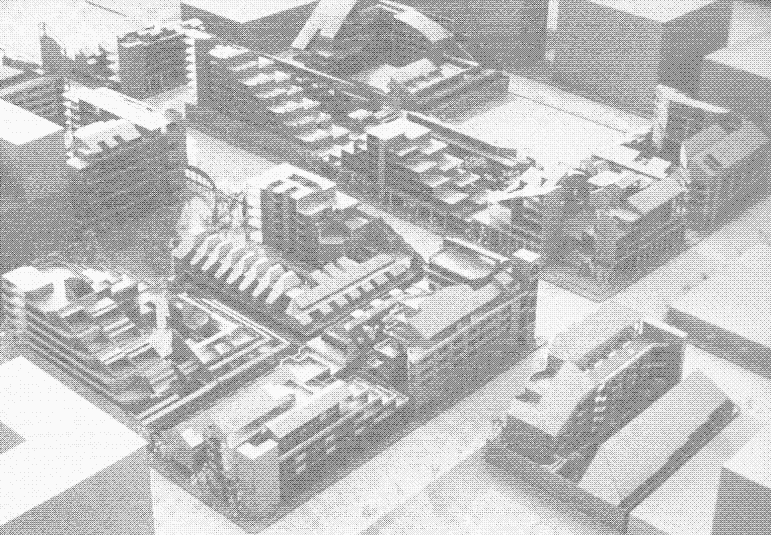 Buildings within the solar envelopes shown above. Housing density is 100 du/ac. Ralph Knowles.

Overall, the maximum densities reached by Knowles and his students are about twenty times higher than those of the average American city (6 to 7 dwelling units per acre). This means that a city like Los Angeles (5 to 7 du/ac) could be shrunk by a factor of 15 to 20, while still assuring four hours of solar access per day to every household.

Based on the relationship between density and surface-to-volume ratio (an energy-related measure of building form), Knowles concludes that three to seven stories generally represent the best size range for urban housing in LA. These buildings - about the size of those in nineteenth-century Paris and the Barcelona Eixample - offer the greatest potential for architects to conserve energy while attaining reasonable densities.

In fact, the density figures obtained by Knowles correspond rather closely with those obtained by city blocks in Paris and the Barcelona Eixample - still the most densely populated, large cities in Europe (despite of the near absence of skyscrapers). 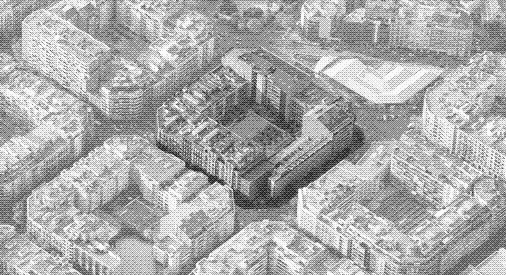 One analysis of a typical Eixample city block (how it turned out, not according to the original plans of Cerdà) found a FAR of 4.70, a dwelling unit density of 93 du/ac (230 du/ha) and a population density of 145 people per acre. 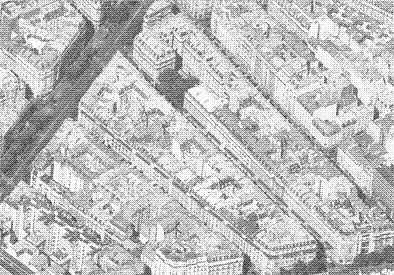 Paris city block with a housing density of 120 du/ac. Source: The Density Atlas.

A close-up of a typical Parisian city block - with courtyards - resulted in a FAR of 5, a dwelling unit density of 120 du/ac (297 du/ha) and a population density of 602 people per acre (see the illustration above).

The densities under the solar envelope also compare favourably with some residential city blocks in New York City - the most densely populated city in North America - although not with others (picture above) and especially not with early twentieth century city blocks in NYC (picture below), which reached 331 dwelling units per acre. Few of those apartments received any sunshine, though.

It should be noted that while Knowles achieves densities comparable to those of Paris and Barcelona city blocks, solar access is improved over these earlier examples, especially compared to Paris where street orientation (and thus building orientation) was not controlled.

Even higher densities and taller buildings could be reached under the solar envelope if larger land parcels were to be assembled, in particular when city-blocks are oriented long in the east-west direction.

This results from the geometric relationship between linear, plane and volume measures; a doubling of plan dimensions will square the land area and cube the envelope potential. An envelope over a 100-ft frontage site has more than twice the volume of two envelopes over adjacent 50 ft lots, because of the additional wedge of volume added when two adjacent envelopes are assembled.

However, it should be remembered that the buildings within a solar envelope will have less volume because of internal overshadowing issues, to be solved by the architect (See part 1). 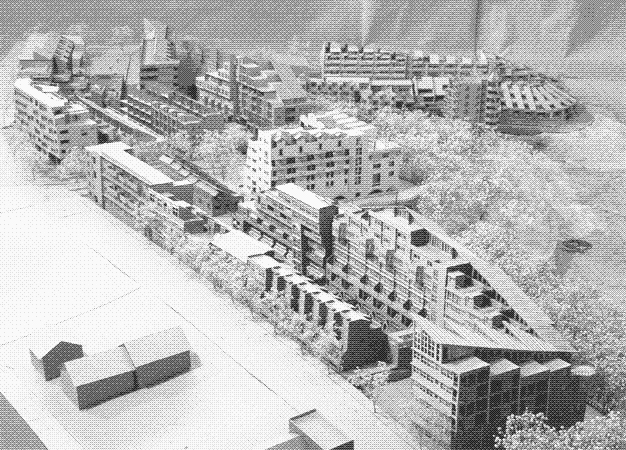 Residential housing with a housing density of up to 128 du/ac (316 du/ha). Overshadowing is purposely allowed on a north-facing slope that has been left open as a public park. Ralph Knowles.

A few special conditions, such as a park or wide boulevard where longer shadows could be cast without harming a neighbouring property, also allow for taller buildings and higher densities. A building project located on a hillside close to downtown LA achieves a density of up to 128 du/ac (316 du/ha), because it is allowed to overshadow a park. In general, though, higher densities will have an adverse effect on solar access. If we want to heat and cool our cities using solar energy, density will generally be limited to about 100 dwellings per acre.

If we would take the highest densities reached under the solar envelope as an upper limit, we could create cities where the critical functions of buildings can be met without fossil fuels, while still retaining (more than) high enough densities to make public transportation, bicycling and walking attractive

Last but not least; the above results apply to Los Angeles. They are valuable for any other city at the same latitude of 34 degrees north or south of the Equator, like Buenos Aires, Osaka, Sydney or Montevideo. At other latitudes, however, things will change, as latitude affects the height and therefore the volume of a solar envelope.

If the cut-off times are held constant, the envelope height decreases as the latitude increases, and vice versa, primarily because of the critical effect of winter sun on the solar envelope’s north slope. Consequently, the volume of a solar envelope increases with proximity to the equator; the volume decreases towards the north and south poles. For example, in Paris (48 degrees latitude), Barcelona (41 degrees) and New York (40 degrees) solar envelopes would be smaller than in Los Angeles (34 degrees). 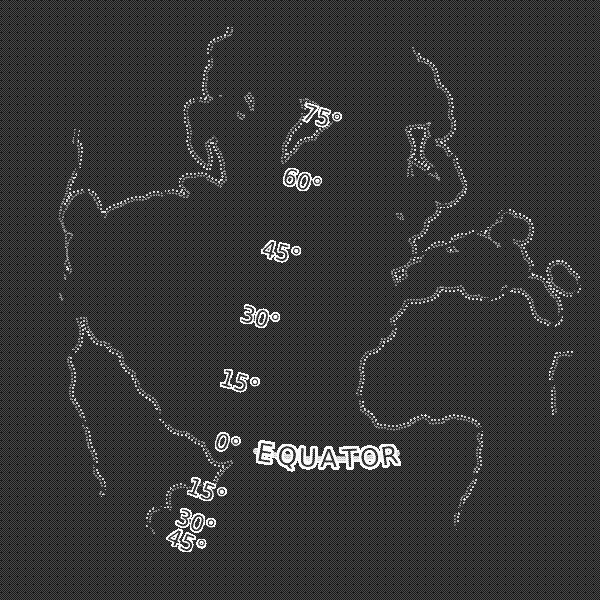 Image: Latitude affects the height and therefore the volume of a solar envelope.

Closer to the equator the position of the sun will not vary much throughout the year, which makes the traditional approach to passive solar design worthless. Instead, the prime concern in the building design would be the ability to keep out the sunlight and heat to reduce the energy consumption of artificial cooling. This might involve orienting the building to the north.

For higher latitudes, Knowles suggests a greater design emphasis on the east and west exposures (including sunscreens for sun control in summer) to improve solar access. Apart from latitude, slopes also have profound effects. A south slope in a more northern country can allow for densities that are otherwise only possible in southern countries, while a north slope does the opposite.

According to Knowles, investigations of the solar envelope have been done in places as far north as Bratislava at 48 degrees and as far south as Honolulu at 21 degrees, leading him to the conclusion, perhaps a bit overoptimistically, that “the benefits of solar zoning can be achieved around the world”.

Density is a pet subject of environmentalists, who argue that densely populated cities are the solution to lower the energy requirements for transportation. On the other hand, the solar envelope shows that above a certain treshold, density can also raise energy requirements, in particular those of heating, cooling and daylighting buildings.

This means that it would probably be wise to aim for a compromise. If we would take the highest densities reached under the solar envelope as an upper limit, we could create cities where the critical functions of buildings can be met without fossil fuels, while still retaining (more than) high enough densities to make public transportation, bicycling and walking attractive.