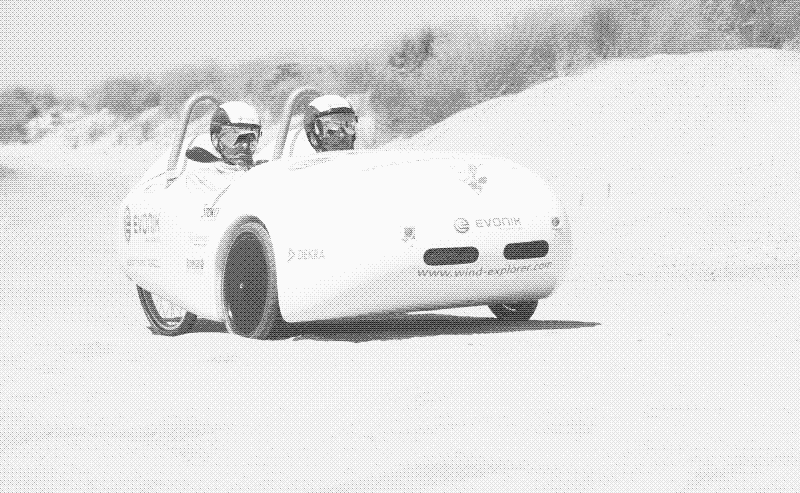 Image: the Windexplorer, a fully electric vehicle based on the DuoQuest velomobile.

You would think that a vehicle that is 80 times more efficient than an electric car, and offers a similar speed and range, would be encouraged by governments worldwide. However, the opposite is true. The biggest obstacle for manufacturers and drivers of electric velomobiles is legislation. Many countries have effectively outlawed electric velomobiles by limiting the speed, power output and use of the electric motor.

Above that speed, the electric motor and battery become a disadvantage rather than a help, because the driver has to provide more power during acceleration in order to propel the additional weight to cruising speed. Once at cruising speed, the motor is of no use either. Only during climbing, when the velomobile will have difficulty reaching speeds above 25 km/h, is the electric assistance advantageous within the limits of the law.

Apart from speed limitation, legislation introduces two additional barriers for electrically-assisted cycles (a legal category that includes velomobiles). Firstly, motor output is limited, to 250 watts in most European countries, to 500 watts in most Canadian states, and to 750 watts in most American states. Secondly, the motor is required to stop working whenever the velomobilist stops pedalling. Completely electric driving is not allowed, even if it is alternated with pedalling.

In some countries and US states, electric velomobiles can be registered as a moped or motorcycle, which makes it possible to drive them legally. However, this introduces different obstacles. The driver needs to be of a minimum age and attain a license, while the vehicle requires insurance and a tag or license plate. It would also be subjected to an annual inspection. Most importantly, electric velomobiles registered as mopeds or motorcycles are regulated as motor vehicles, rather than as consumer products, which introduces additional safety requirements and rigorous testing before they are allowed on the market. Meeting these criteria is a costly affair for the producers of velomobiles, which are often very small companies.

Within the limits of the law, the electric motor and battery are a disadvantage rather than a help

In Belgium, as in most European countries, electric velomobiles cannot be homologated as a moped or motorcycle. Consequently, the eWAW that I tested was not a legal vehicle. It violated two of three regulations: it had the sensor that shuts off the motor at speeds above 25 km/h removed, and it had a motor that can be operated according to the will of the rider, which allows for driving without pedalling. 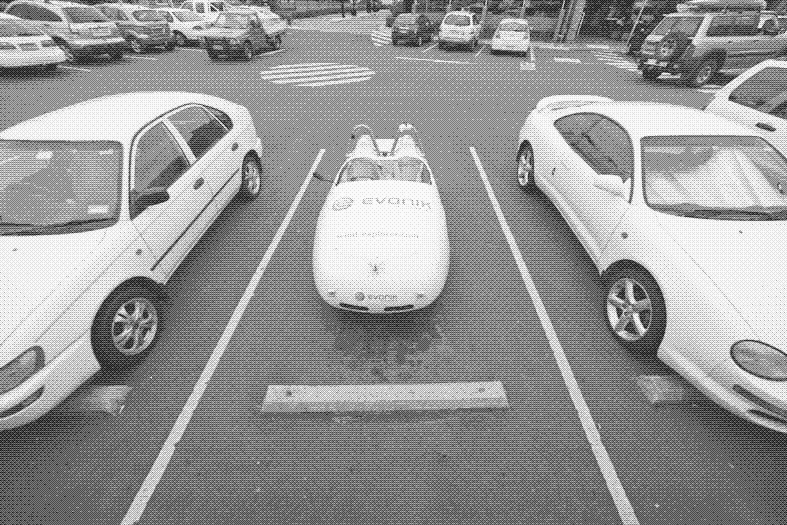 In the USA, limits for maximum motor power vary from 750 to 5,000 watt, depending on the state. In some states, cycles with an electric assistance of up to speeds of 30, 40 or even 60 mph (48, 64 and 94 km/h) are considered bicycles. In other states, all cycles with electric assistance are regulated as mopeds, regardless of motor power and speed. Some states have no laws and others outlaw electric cycles altogether. To make things more complicated, several countries and states also regulate things like seat height, braking distance, type of transmission, the weight of the vehicle, the diameter of the wheels or the number of wheels (some allow two and three wheels but not four wheels, others allow two or four wheels but not three wheels).

A car with a top speed of 270 km/h can be driven anywhere on Earth, while an electric velomobile with an electric assistance of up to 50 km/h is illegal is most countries

Road regulations are even more confusing, because they are often complicated by provincial and municipal restrictions. Generally, if electric velomobiles are registered as a bicycle, they should use bike lanes and bike paths whenever possible, while velomobiles registered as mopeds or motorcycles are obliged to share the road with cars. However, there are many exceptions, effectively creating a legal limbo.

This is in stark contrast with the laws regulating engine power and speed for cars, which are the same all over the world. In particular, both engine output and maximum speed are left completely free. This leads to the very strange fact that a car, for instance a Porsche Cayenne Turbo S with a weight of 2,355 kg, an engine of 382,000 watts and a top speed of 270 km/h can be driven anywhere on Earth, while an electric velomobile with a weight of 35 kg, a motor of 250 watts and an electric assistance of up to 50 km/h is illegal in most countries. A consequent legislation would either limit the motor output and speed of both cars and velomobiles, or leave motor output and vehicle speed unregulated in both cases, combined with maximum road speeds and speed checks.

Towards a New Class of Vehicles?

The complex legal situation in which the velomobile finds itself, is telling. The velomobile, and especially the velomobile with electric assistance, calls into question the validity of the existing vehicle categories. The velomobile can be described as an extremely fast and comfortable cycle, as well as a particularly efficient automobile. It is difficult to categorize, and this makes the technology so interesting. The mobility debate is characterised by an ideological divide between motorised and non-motorised options: one is either pro-automobile, or pro-bicycle. The electric velomobile shows that there is a middle-ground, offering hope that both camps might one day unite.

In Bicycles Don’t Evolve: Velomobiles and the Modelling of Transport Technologies, Peter Cox and Frederik Van De Walle (the latter designed the WAW) advocate the velomobile as a new, separate class of vehicles. They argue that the legal uncertainty surrounding the velomobile is a consequence of a pseudo-Darwinist view on the development of vehicle technology (and technology in general). According to this mental model, the bicycle ‘evolved’ during the early 20th century into the faster motorcycle and next into the faster and more comfortable automobile, implying a logically ordered series of improvements which reflects an inevitable progress and an increasing rationality.

Any form of transport ‘further back’ along the evolutionary narrative is rendered lesser, anachronistic and outmoded by its superior, more evolved ‘offspring’. This is why, when we are discussing sustainable transportation options for the future, we invariably start from the automobile — witness the consecutive hypes on hydrogen cars, bio-fuelled cars, compressed-air cars, and electric cars. Cycles, on the other hand, are (in most western countries) considered to be vehicles driven in leisure time, or for people who cannot afford a car. 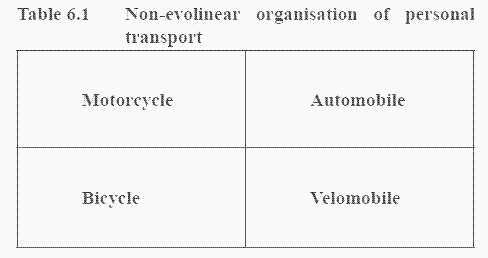 Electric velomobiles, being a hybrid between a velomobile and an automobile, can be designed in many different ways.

Thus, Cox and Van De Walle present an overview of the different types of individual transport technologies — and their hybrids — without the implicit hierarchy of values in what they call the ‘evolinear model’. In this mental framework, the automobile dominates. By introducing the velomobile as a fourth category, this is no longer the case. However, in the new mental framework, the automobile is not considered an enemy. Electric velomobiles, being a hybrid between a velomobile and an automobile, can be designed in many different ways. The eWAW comes very close to the unassisted velomobile. But electric velomobiles that come closer to automobiles are a possibility, too.

Pimp up your Velomobile 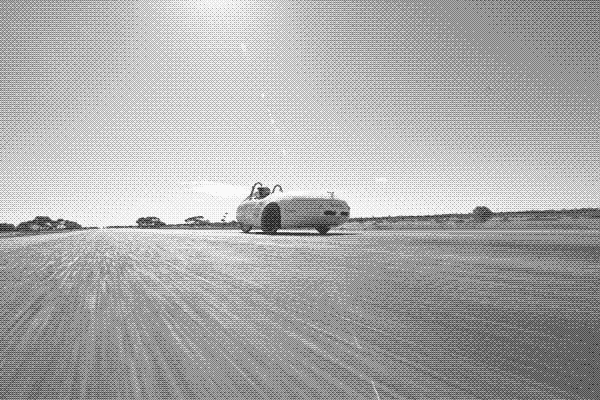 In the third configuration, the input of the electric motor is larger than the input of the driver. A more powerful motor would result in a faster acceleration and a higher climbing speed (and thus in a higher average speed), but not in a higher top speed because the electric assistance is shut off at 45 to 50 km/h. It would further reduce the effort needed to maintain cruising speed (if the driver is fit), or make it even easier for people with an average fitness level to reach higher cruising speeds.

This type of velomobile exists in Germany, where more powerful motors and higher speeds are allowed if the vehicle is registered as a moped. Examples are the 500 watt Alleweder 4 and the 600 watt Alleweder 6, the 750 watt Aerorider Sport, and the 500 watt Hase Klimax 5K (not a real velomobile but a recumbent with a foldable bodywork, which can “zip off from the stoplight faster than some roadsters”). The Aerorider puts the additional motor power to use in another way: it has a more luxurious interior design, resembling that of a car, which adds comfort but also weight (the vehicle weighs 55 kg).

Because the eWAW is 80 times more efficient than an electric car, there is quite some room for pimping up a velomobile.

The fourth possibility is to do away with the speed limitation altogether. This can be applied to all configurations described above. The motor would assist the driver automatically to whatever possible speed. The top speed will depend on the output of both the motor and the driver. These vehicles are not on the market, but it is possible to adapt one of the above described velomobiles by removing the sensor that shuts off the motor at whatever maximum speed lawmakers have decided, and by mounting higher gears. There is no mechanical limit to the speeds that this type of velomobile could achieve. There is no reason why a velomobile can’t go as fast as 120 km/h (75 mph). In fact, the speed record for an unassisted velomobile stands at more than 130 km/h (80 mph).

Trading efficiency and range for speed or comfort

In the fifth and last configuration we do away with the automatic activation of the motor, which is now standard in all electric cycles. In this case, the driver decides when the motor operates. This can be applied to all configurations, and the effect is always the same: the motor can also be operated when the driver is not pedalling at all. The adapted eWAW that I drove could be driven in this way for about 60 km at a speed of about 30 km/h — still fast enough to overtake all but the speediest cyclists. This is not a particularly exciting but nevertheless very pleasant way of travelling — and the bodywork makes sure that nobody knows you’re not pedalling. 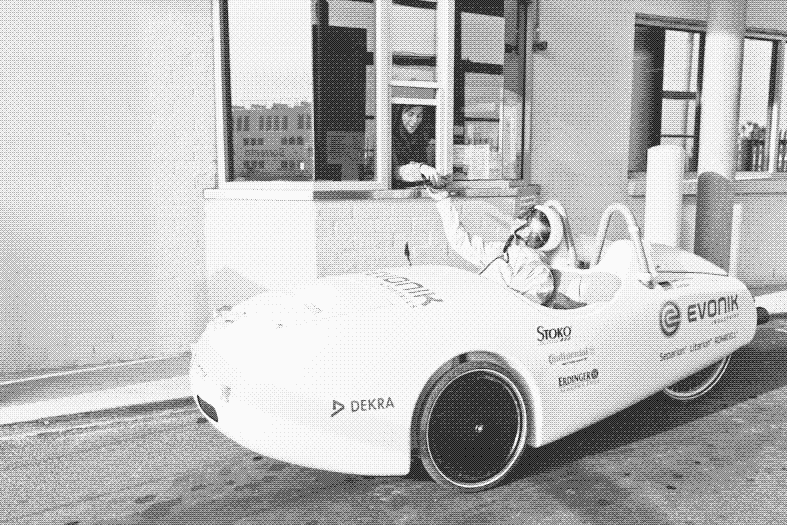 The possible configurations for electric velomobiles include electrically-assisted cycles, driver-assisted motorcycles, and fully motorised vehicles. With every step, efficiency and range is traded for speed or comfort. A more powerful motor will demand more of the battery. More batteries can be added to make up for the decreased range, but this will increase weight and thus decrease efficiency. However, because the eWAW is 80 times more efficient than an electric car, there is quite some room for pimping up a velomobile. The Alleweders with more powerful motors can be bought in Germany with batteries of 1,664 Wh — that’s still 14 times more efficient than the Nissan Leaf, for a similar range.

Even a fully electric velomobile speeding at 100 km/h and packed with batteries would still be more efficient than a Nissan Leaf. We have argued repeatedly that automobiles should become lighter and slower in order to become more efficient, but of course the same results could be obtained by making cycles faster and heavier.