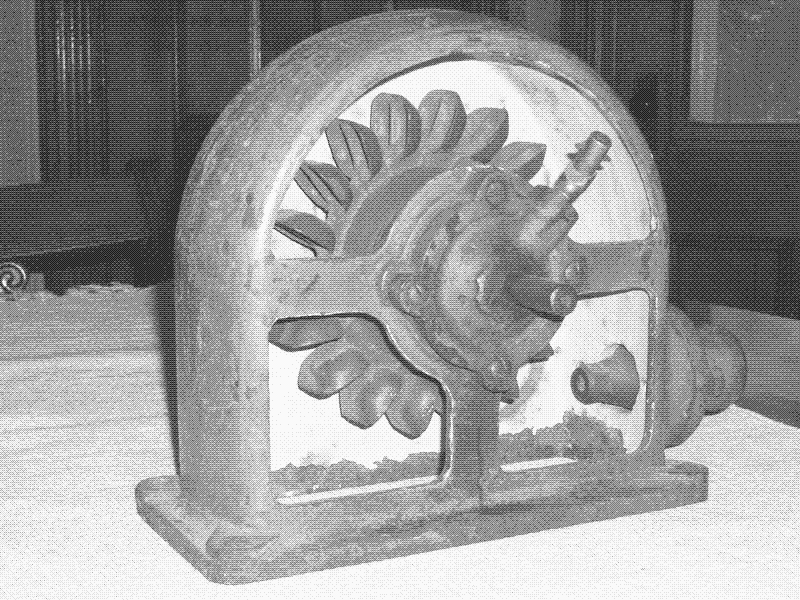 A late nineteenth-century water motor with one side of the casing removed. Image: Old Pelton.

Few people in the western world realize that they have an extra power source available in their household, workshop or factory: tap water.

Just before the arrival of electricity at the end of the nineteenth century, water motors were widely used in Europe and America.

These miniature water turbines were connected to the tap and could power any machine that is now driven by electricity.

Power from the tap

Water has been the main inanimate source of mechanical power from antiquity right up to the beginning of the twentieth century. Although most water wheels were located at the banks of the river (or in the river itself), some were set up at considerable distances from a water source. This was made possible by the introduction of hydraulic power transmission—the process by which water from a stream is led through artificial watercourses to water wheels built on the land.

To support hydraulic power transmission, man-made channels (“power canals” or “aqueducts”) could be dug into the earth or carved out of the rocks (“ditches”). They could also be elevated structures whose walls were raised above the surrounding terrain (“flumes”). Water reservoirs formed by dams could be integrated into these power transmission networks, regulating water flow, providing power storage for times when water was running low, and increasing the “head” or fall of water for a vertical overshot water wheel. The use of power canals increased throughout the medieval period and became widespread during the 1500s.

In the mid-nineteenth century, many European and American cities introduced a more sophisticated water distribution system: the public water supply. Although this introduction was an answer to health concerns (it had become clear that reoccurring epidemics were the consequence of drinking contaminated water), it became quickly obvious that the potable water sent through the pipelines of the public water supply could also provide motive power.

Waterwheels were still the most important source of mechanical power in the early days of public water mains. Most European and American cities had running water before they had electricity, so there was a market for a compact power source that could be used in the city, as an alternative to steam engines (which were too expensive, too dangerous and too unpractical to operate on a small-scale) or hand and foot powered machines. 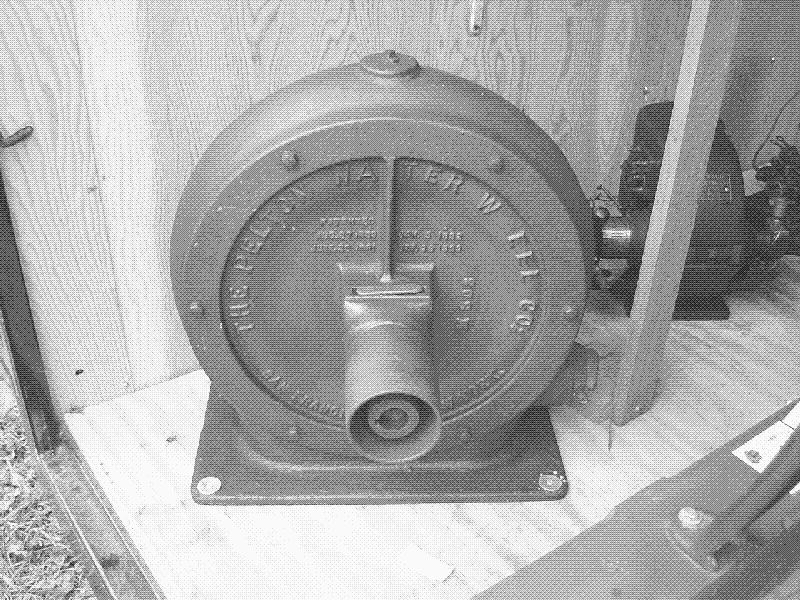 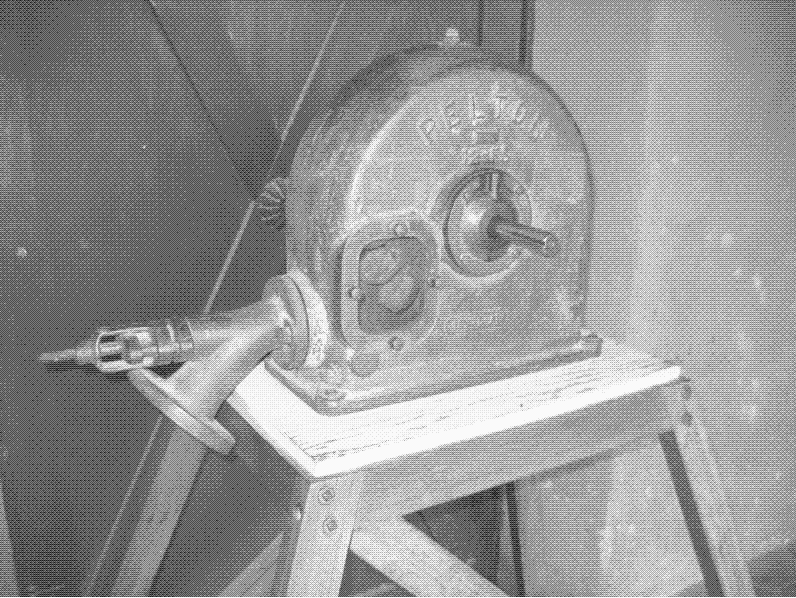 The town mains were no different from the hydraulic power transmission systems built in earlier times. In public water supply systems, traditional reliance on geological features as a head for the hydropower cycle is replaced by the use of a water tower. Water is pumped into an elevated reservoir, which could be on a hill or on top of a specially built water tower (a combination of both is also possible).

It became quickly obvious that the potable water sent through the pipelines of the public water supply could also provide motive power.

In the town mains, the role of the aqueducts or power canals is taken over by a much more intricate network of pipelines. This prevents debris from entering the water and makes uphill water transport easier. Water piping technology was used in some ancient civilizations, but the nineteenth-century systems introduced some lasting innovations.

First of all, thanks to the screw type tap (which was patented in 1845), the water supply could be easily regulated. Second, the water could be further distributed inside individual buildings, often reaching multiple rooms at several floors. At any of these spots, all you had to do to receive motive power from the town mains was to connect a small water turbine to the tap. This is exactly what happened.

In Europe, small motors using the public water supply appeared in the 1840s. In the US, they came into extensive use in the 1870s and 1880s. A water motor consisted of a small water turbine that was suspended in a metal casing. The diameter of the turbine runner could be anywhere between from 20 to 90 cm. 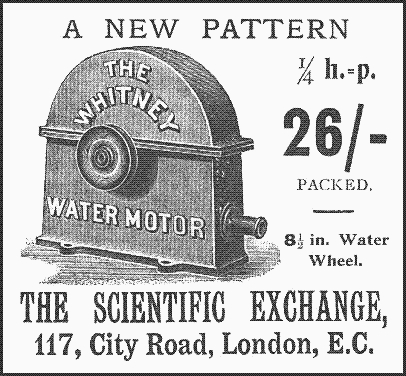 A 1906 advertisement for a typical American water motor. 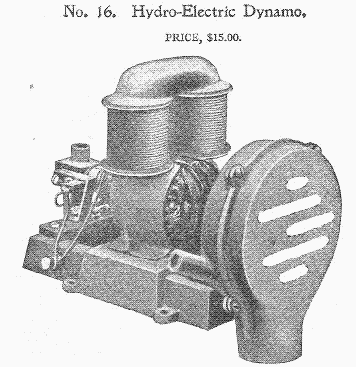 A hydraulic dynamo. Image: The Museum of Retrotechnology.

Water motors operated machinery by means of a mechanical power transmission, similar to old-fashioned wind, water, and pedal powered machines from that era. The shaft of the water turbine was either equipped with a belt pulley to which different machines could be attached, or it drove one machine directly.

At the end of the nineteenth century, water motors were also used to power electrical devices, especially radios and light bulbs. In this case, the water motor drove a dynamo that produced electricity on the spot. Compact units consisting of a small water turbine directly coupled to a dynamo were commercially available.

Output and Efficiency of a Water Motor

Most water turbines derived pressure by extracting energy from the impulse of moving water as opposed to generating energy via weight, as was the case with most water wheels and some other water turbines. A major innovation was the Pelton wheel, which was invented in 1878.

This water turbine consists of a series of cups fastened at equal intervals around the periphery of a circular disc (the “runner”). The water enters the casing through an inlet pipe, where it is forced through a nozzle which reduces its volume and increases its velocity, after which it is directed to the cups. By changing the nozzle which influences this fluxuation in pressure, the power obtained from a wheel could vary. The exhaust water is dropped out of the bottom of the casing, or led away by an outlet pipe.

The efficiency of a Pelton wheel is not dependent on its size, which makes it especially attractive for smaller powers.

The Pelton turbine is especially well suited for use in combination with the town mains, due to the fact that it requires a high head and a low water flow. A Pelton wheel is up to 90% efficient, which is comparable to the efficiency of a large, modern electric motor. Unlike steam engines, electric motors, and most other water turbines, which become less efficient as they become smaller, the efficiency of a Pelton wheel is not dependent on its size, which makes it especially attractive for smaller powers. 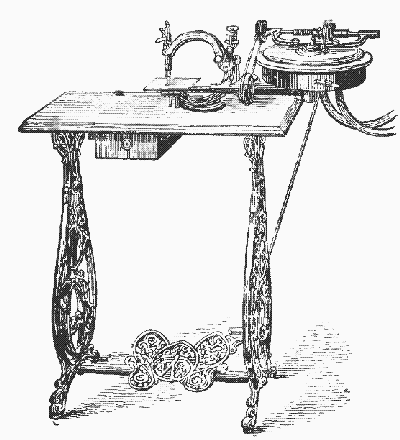 Water turbines (such as the Pelton wheel) are much more compact than water wheels, which makes that a small motor can deliver more energy than one would suspect. The maximum power output of a water motor is determined by two factors. The first is the prevailing water pressure and the second is the water flow rate, which is defined by the pipe diameter and the velocity of the water. The latter factor is rather fixed for narrow pipes, because at velocities above 8 km/h friction becomes problematic.

Water pressure in the town mains is typically between 40 and 70 psi (2.75 to 4.8 bar), and was closer to 70 psi in the nineteenth century. With a water pressure of 70 psi and a pipe diameter of 1.25 cm (a typical size for individual branch lines running to the taps), the maximum power output of a water motor is 0.33 horse power (or 243 watts of mechanical power). Even after you take into account the efficiency loss in the motor, this is quite a lot of power: Two to three times as much as a human operating a pedal powered machine can sustain for an hour or longer.

Water motors supplied a need almost entirely unmatched by other new motors from that time, and they exploited a source of energy readily available from centralized systems already built in most urban areas. However, at least in the United States, their succes was short-lived. When electric motors and gasoline engines became available, the water motor lost its attraction. In 1900, the amount of water motors in the US (an estimated 30,000 motors aggregating 26,000 horse power) was about one-fifth of the amount of gasoline engines and one-tenth of the amount of electric motors. [Source: Hunter 1991]

At the end of the nineteenth century, water motors were also used to power electrical devices, especially radios and light bulbs

The main drawback of water motors was their very high use of potable water. Using a 1.25 cm diameter pipe and a pressure of 70 psi, a water motor consumed 30 litres of water per minute for a power output of 243 watts. This means that it took 7,440 litres of water to produce 1 kWh of mechanical energy. To give an idea: People today in the west consume less than 500 liters of potable water per day, and they consume at least 5 kWh of electric energy per day. 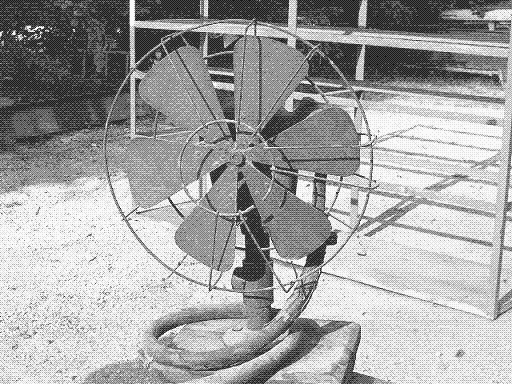 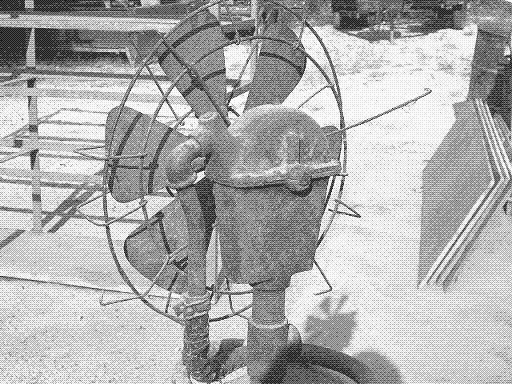 If the water pressure dropped below 70 psi, a water motor’s power output decreased with it, while potable water consumption remained the same. The minimum pressure in the public water supply was (and still is) 20 psi (1.4 bar). Below that value, there is a risk of contamination because polluted water could enter the mains through leaks in the pipes.

If you were unlucky and you got a water pressure of just 20 psi, motor output would have been limited to a much less impressive 0.09 hp (67 watt). You could have chosen to restore the power output by increasing the pipe diameter, but that would have further increased the consumption of potable water.

Water consumption was further increased by the irregularity of the water pressure. The use of a water tower is advantageous from an energy efficiency viewpoint, because you can create water pressure with low capacity pumps. The pumps only have to meet average demand. A higher than average demand (for instance, when everybody takes a shower in morning) can be dealt with by a decreasing water level in the tower. The reservoir will be filled again when demand is lower than average (mostly at night).

On the other hand, if you choose to create water pressure by pumping water directly into the mains (a modern approach that is gaining popularity), you need high capacity pumps that can meet peak demand, and they will be running inefficiently most of the time.

While the use of water motors in the US came to an end early in the twentieth century, the Europeans took hydraulic power transmission one step further 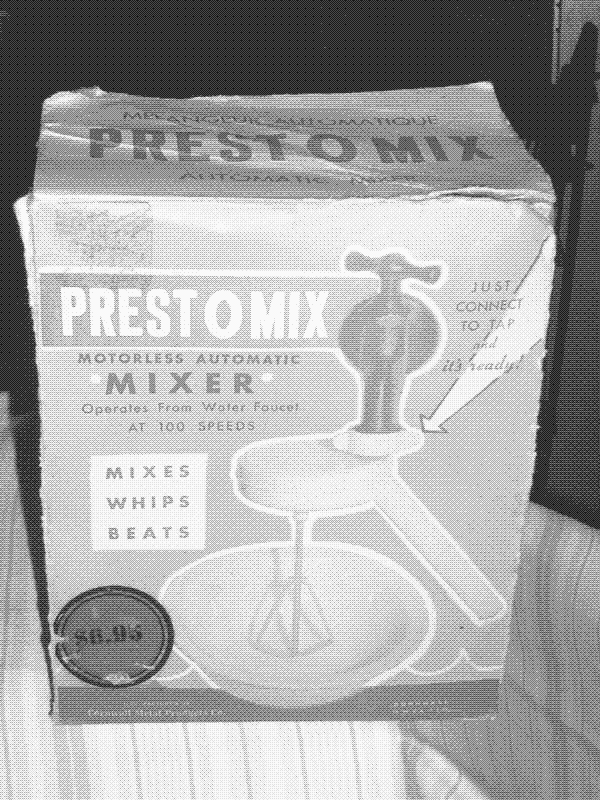 In Search of a Better Solution: the Hydraulic Accumulator

As we have mentioned before, the maximum power output by a water motor is determined by two factors: Water pressure and water flow. Increasing the pipe diameter (and thus the flow rate and water use) is only one way to increase the power capacity of a water motor. The other way is to increase the water pressure, which yields much more interesting results. For example, we could produce much more energy with much less water.

With a water pressure of 700 psi (48 bar), which equates to ten times the pressure in the public mains, a water motor connected to a 1.25 cm pipe could produce a power output of 3.3 horse power (or 2,500 watts of mechanical energy). That’s ten times more power for the same 30 litres of water per minute (or ten times less water use for the same power). To create a water pressure of 700 psi, it would be mandatory to build a water tower of almost 500 meters tall. Unfortunately, this is not practical to build.

While the use of water motors in the US came to an end early in the twentieth century, the Europeans found a solution for the high water use of water motors and took hydraulic power transmission one step further. Firstly, they set up special power networks which distributed water under pressure for motive power purposes only. This eliminated the need to use potable water. Secondly, Europe switched to a much higher (and regular) water pressure, which was made possible by the invention of the hydraulic accumulator.