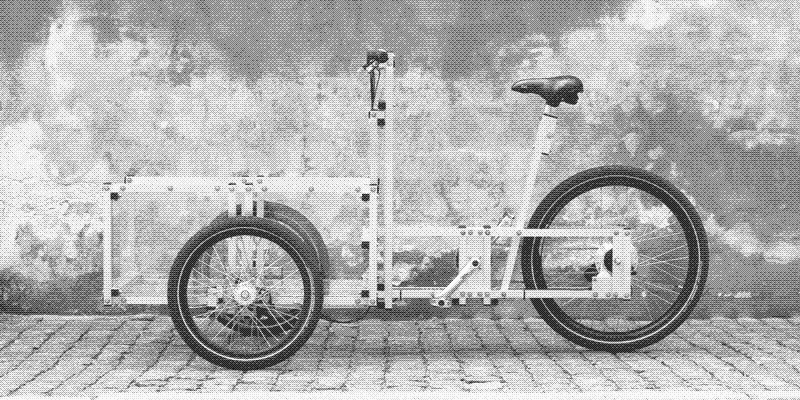 Following more than two years of research and development, the Danish art collective N55 has presented its modular cargo cycles: the two-wheeled XYZ Cargo Bike (90 kg loading capacity) and the three-wheeled XYZ Cargo Trike (150 kg loading capacity). The assembled versions sell online for about half the price of similar cargo cycles on the market. Because their design is open and modular, the XYZ Cargo Cycles are even cheaper to build yourself, and easy to customize.

XYZ Cargo brings together two technologies that have been praised at Low-tech Magazine: open modular hardware and cargo cycles. Modular consumer products, whose parts and components could be re-used for the design of other products, would bring important benefits in terms of sustainability, while they would also save consumers money, speed up innovation, and take manufacturing out of the hands of multinationals.

Cargo cycles, on the other hand, could handle an important part of cargo traffic in cities, paving the way towards sustainable and free-flowing traffic, while at the same time offering important economic advantages to tradesmen, artisans and service providers. The open modular cargo cycles built by N55 in collaboration with designer/artist Till Wolfer combine all those benefits.

The market for cargo bikes is booming. This was the overall feeling at the International Cargo Bike Festival in Nijmegen (the Netherlands) and at the Berliner Fahrradschau in Germany this spring. The sales figures are skyrocketing and there is plenty of innovation going on.

A growing number of vehicles features an auxiliary electric motor, while many cargo trikes are now available with tilting mechanisms for fast cornering. Another innovation concerns the steering mechanism; several manufacturers have presented systems that obviate the need for a conventional fork, allowing for better control and increased cargo space. 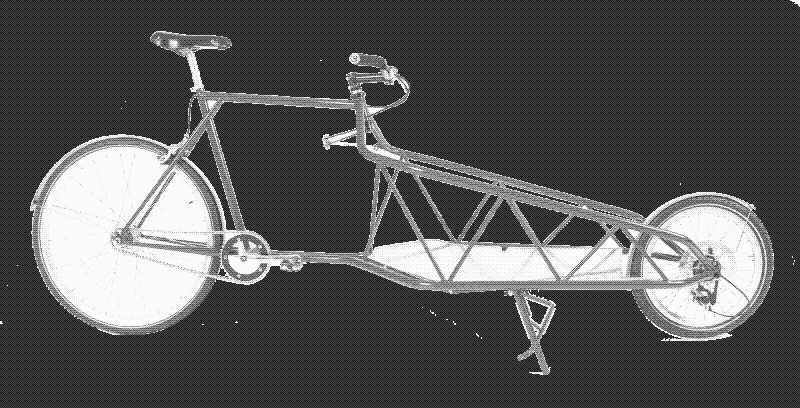 The Elian Cargo Bike, with steering in the front hub.

Unfortunately, these innovative vehicles often come with a hefty price tag. The prettiest cargo cycles such as the Elian Cargo Bike (a racing version of a cargo bike with steering in the front hub), or the electrically assisted Butchers & Bicycles MK1 (with tilting mechanism) set you back at least four or five thousand euro (\$ 5000 - \$ 7000), without any options.

These cycles are well worth the money, but they are obviously not within reach of everybody. Less fancy cargo cycles still have minimum prices of around 2,500 euro (\$ 3,500).

This is why the affordable XYZ Cargo Cycles deserve our special attention. The assembled versions of the XYZ Cargo Bike and XYZ Cargo Trike sell online for 1,350 euro and 1,600 euro, respectively (\$ 1900 - \$ 2,220), which is about half the price of similar cargo cycles on the market. However, the cycles are not less interesting or innovative, on the contrary. For example, they feature a revolutionary steering mechanism inspired by motorcycles, which increases the cargo space considerably.

The low price is largely due to the modular nature of the vehicles. The XYZ Cargo Cycles are not built in a traditional way. Unlike the singular load-bearing tube seen in conventional bike structures, the main structure is an orthogonal spaceframe of standard aluminum square tubes of varying lengths in which holes are drilled.

The spaceframe is based on XYZ Nodes, which is a modular construction system developed by N55. It builds upon an old, well-known principle of joining timber or steel struts together. Structurally, the connection system shares similarities with lashed joints used for example in the traditional wooden frames seen in inuit kayaks, or with rivet constructions such as airplane hulls or old ship hulls. 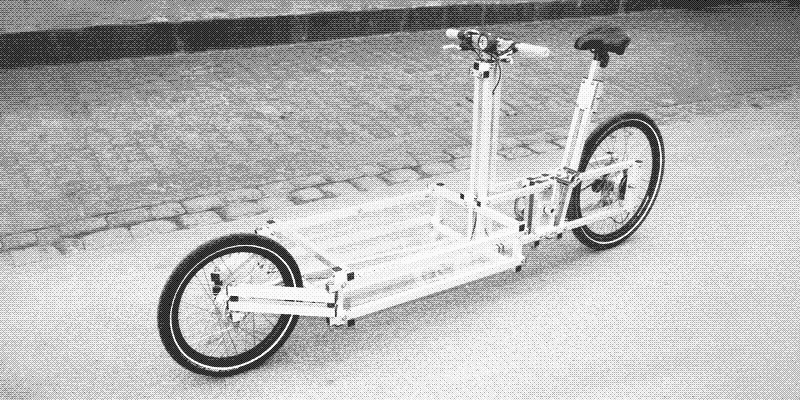 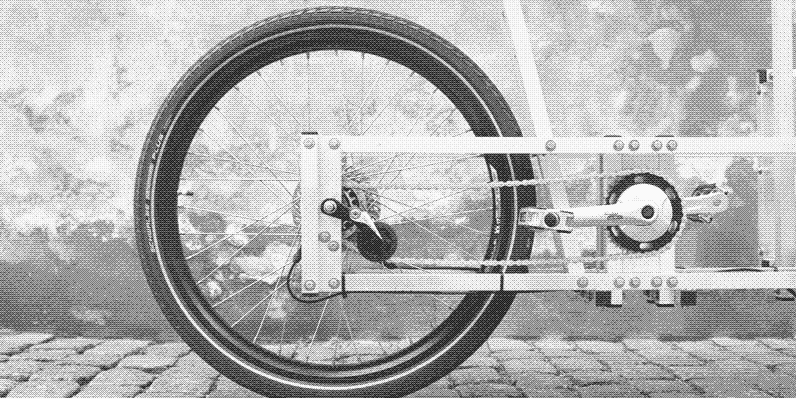 It’s a simple method of building light-weight things from durable materials in a low-cost way. XYZ Nodes forms rigid corners that become flexible when exposed to forces that would break other joining methods like a welded joint. The consequence is that it allows for rigid frames relying on corner connections that are not necessarily triangulated for greater strength, hereby leaving a free open space inside the frame. This made it possible to place gear wheels and chains within the frame, away from the users.

Easy to Build and Customize

The cargo cycles are open source concepts which you can modify yourself. The designs—including any new construction principle used in the system—and the XYZ construction and connection principle are open source provided under the rules of Creative Commons CC BY-NC-SA 3.0. Users are free to use available designs, as long as it is for non-commercial purposes and any use of the work includes proper credits.

This means that you can obtain the cycles even cheaper if you buy standard aluminium tubes and cycle parts, available all over the world, and build the cycle yourself. The frame is assembled using stainless steel bolts, washers and nuts. The assembling requires only simple hand-held, non-specialized tools, like a drill and a metal saw. No welding process is required.

Like all modular systems, XYZ nodes enable people to build things based on the principle of a few different parts repeatedly used to create an overall structure, similar to construction sets like Lego, Meccano and Erector. Because of the open and modular design, the XYZ Cargo Cycles are easy to customize and to rebuild. For example, a cover or a body to improve wind resistance and protect from the weather can be applied—turning the cargo cycle into a velomobile. 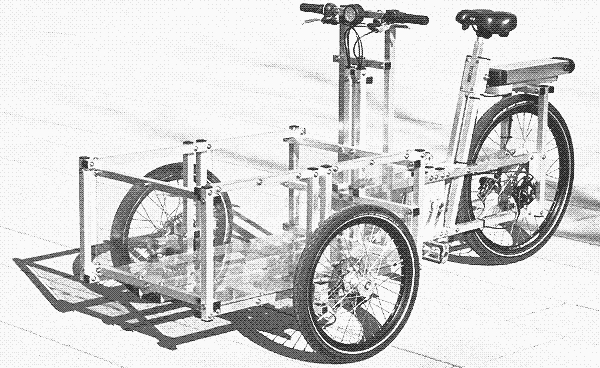 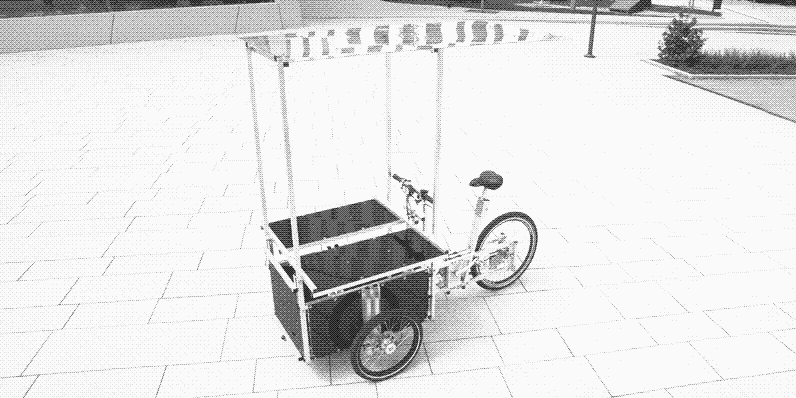 Several modules have been developed that can be put on top of the XYZ Cargo Trike to transform its functionality: a roof and table module, a passenger seat module, a kitchen module with table, roof and sink, and a platform module. The latter transforms the cargo cycle into a 1.5 x 3 m large movable space, while from a legal point of view remaining a bicycle. The platform module was used to create a ParkCycle Swarm, which empowers people to build an instant public park whenever and wherever they want to.

N55 is not a commercial enterprise, but a non-profit organization that aims to restore local production in a socially just and environmentally sustainable way. This is another reason for the modest prices. All the money earned with the sale of cycles will be invested in the further development of the technology. N55 gives away the building plans and offers the assembled bikes for a low price because they want to see as many of them on the road. 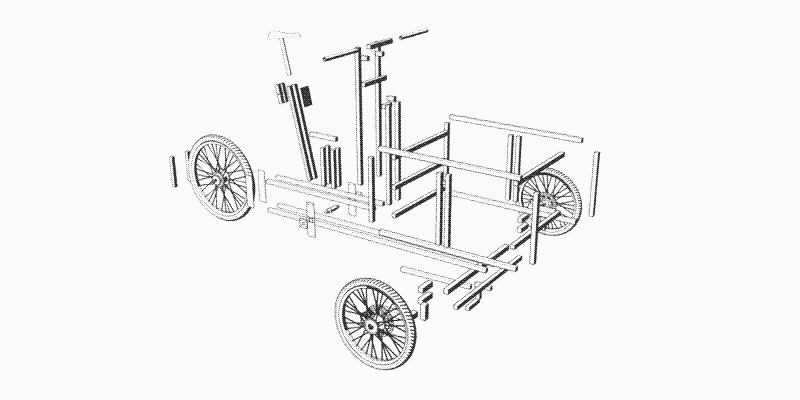 Two other vehicles have been produced, the XYZ One Seater (20 kg) and the XYZ Two Seater (34 kg). These pedal powered vehicles (with or without electric assist motor) are recumbent tricycles with one or two seats. The Two Seater can also be equipped with a cargo platform instead of a second seat. These cycles are not for sale, but the open designs are online at N55’s website. The XYZ One Seater’s construction drawings are available for download here and those for the XYZ Two Seater are here.

See and read more: XYZ Cargo / XYZ Spaceframe Vehicles / N55. And don’t miss the Eight-Wheeler Cargo Cycle, which got most of the attention at the Cargo Bike events.