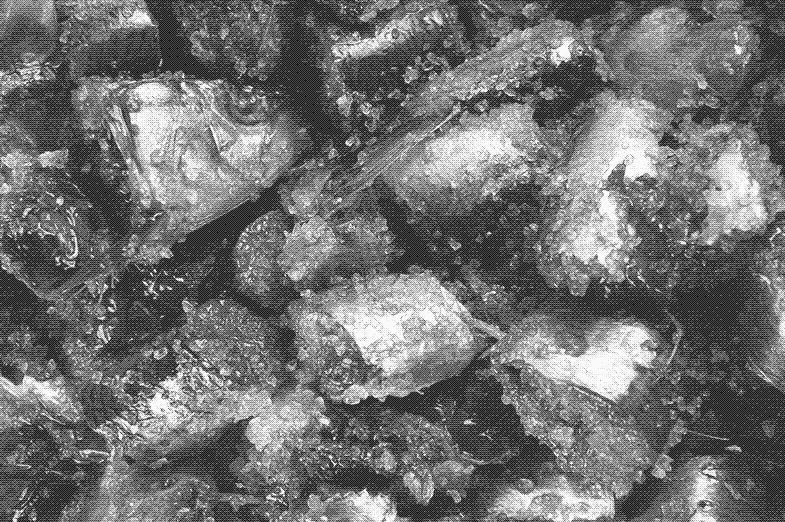 Fish sauce is widely seen as unique to Eastern cooking —distinctive of Thai, Vietnamese, or Phillipine cuisine. Less well known is the fact that it was one of the main condiments used by the ancient Romans, and that they had an extensive, low-tech trade network to produce it in large quantities. Making fish sauce also helped reduce food waste both in the food industry and for households.

Ancient Roman and modern fish sauces are probably identical in preparation, color, and taste. Making garum, as it was called then, is simple. Place some fish—such as mackerel, sardines, anchovies, or discarded fish innards—in a barrel with salt at a 5:1 ratio. Place a weight on top of the mixture, and let sit for 2-3 months.

By this time the fish will ferment and liquify, creating an umami flavor similar to that of parmesan, and a slightly pungent smell. You can now take out the liquid, and use the remaining residue to make a second batch of fish sauce with more salty water. 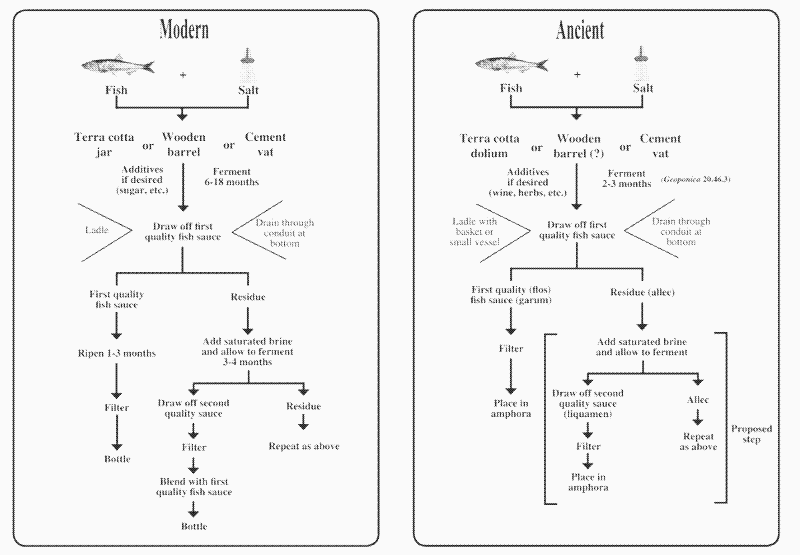 It was long thought that garum was a condiment reserved for the rich. The elite like to have access to ‘exotic’ flavors, and historians have suggested that for this reason garum was mainly appreciated by rich gourmands. Yet recent research shows that fish sauce was a condiment enjoyed by the hoi poloi as well.

The extent of fish sauce urns in Pompei’s restaurants, homes, and public places indicates that it was available to and enjoyed by most citizens, elite or slave. It was included in over 75% of recipes found in a cookbook from the first century AD, which included many dishes that were likely composed by slaves or servile cooks.

In addition, the trade network for fish sauce was immense. Archeologists have found over 60 fish sauce-processing sites in Spain and Portugal, and one site in Morocco had a production capacity of more than 1000m3. By plotting shipwrecks containing amphorae of fish sauce, we now know that fish sauce was widely traded across the Mediterranean. Spanish fish sauce amphorae have been found in Greece, Lebanon, Germany, and England.

These processing sites functioned at a scale similar to modern factories—supplying the multitudes of Roman soldiers, sailors, and slaves with flavor enhancer. These factories were placed strategically along lines of tuna migration, so that fishers could bring their catch to shore, which could then immediately be processed and sent throughout the empire. During off-seasons, these same sites would process smaller fish such as sardines and anchovies.

Fish fermentation therefore allowed the ancients to store their fish surplus for long periods, in a time when there were no freezers and fishing was bound to fish migratory patterns. In addition, these factories likely fermented the insides of the larger fish, making use of what in our society would be considered a waste product. In this way, the fermentation process was a useful compliment to, and byproduct of, their large fishing industry, which was necessary to feed the mobile masses of the Roman empire.

But fish fermentation also happened at smaller scales. Fermentation vats have been found at fish market stalls and in private homes, indicating that many Romans supplemented their income from a ‘cottage industry’ of fish sauce. Fishmongers would make use of fish waste and sell it on the side, often flavoring it with herbs, spices, or wine.

The condiment had many benefits for the Romans. It contains lots of amino acids, vitamin B-12, and other micronutrients. It has low bacteria content and isn’t prone to spoilage because of its fish-to-salt ratio and low pH. Romans ate mostly lentils, bread, dairy, vegetables, fish, and a small amount of meat—so fish sauce was a crucial flavor enhancer and appetite-stimulant.

But perhaps most importantly, the fermentation of fish provided a low-tech alternative to storing fish yields for up to two years, in a time when there were no modern fishing fleets containing on-board processing facilities, freezers, which produce 27 million tonnes of waste from by-catch annually. There were also no supermarkets lined with fridges, so consumers needed access to quality products that remained edible for long periods of time.

It also provided a cheap method of processing what is considered refuse in our society: fish intestines. Imagine if every modern fish market had a big vat of fish innards fermenting in the back, instead of sending those tasty intestines to the landfill.

This low-tech solution to fish waste may be a bit beyond our comfort level. Even Pliny the Elder snubbed Ancient Roman fish sauce, referring to it as “that secretion of putrefying matter”. But on the other hand, the fact that the fish sauce developed by Romans is almost exactly the same as that found in South-East Asia today, indicates that this type of food preservation can have universal appeal. Over ⅓ of food goes to waste globally—making fish sauce an inexpensive, low-energy, simple, and appetizing way to minimize that waste, both at large and small scales.