Many societies, ancient and contemporary, have innovated ways of supplying their fields with fixed nitrogen and phosphorus—two crucial ingredients for crop productivity. One is crop rotation, which alternates nitrogen-fixing and nitrogen-exhausting crops. Farmers around the world make use of chickens, ducks, and geese to add “fresh” guano to their fields. Cattle manure is another useful alternative—although it often lacks in phosphorus. Much more labor intensive than simply adding fossil-fuel derived synthetic fertilizer, these practices tend to build up soil, limit greenhouse gas emissions, and lead to less run-off into rivers, lakes, and oceans.

Persian pigeon towers are one of the more elegant solutions to the nitrogen-phosphorus problem. These are essentially castles built for thousands of wild pigeons, strategically placed in the middle of the fields. Their droppings were shoveled up once a year and sold to nearby farmers. While most pigeon towers existing today are in disrepair, the oldest still standing are dated to the 16th century (but they are assumed to have existed over 1,000 years ago) and helped fuel the cultivation of Persia’s legendary orchards, melons, and wheat production.1

The basic design of pigeon towers is simple. Its main structure is conically shaped and made of mud bricks. At the center of the structure rests a large cylindrical drum, surrounded by smaller pillars, also made of the same brick—this design maximizes the potential surface area, allowing some towers to house up to 10,000 pigeons. The bricks are indented to create a small cove and ledge for the pigeons to nest in. At the very top of the tower there are holes that allow pigeons to come and go as they please. These holes are also designed to be inaccessible to snakes—the pigeon’s main natural predator in the region.

The structural cracks in many pigeon towers are said to be due to the tremors caused by thousands of birds in panicked flight when they spot a snake. The central drum also houses a stairway, and most towers have one or two doors to allow someone to collect droppings and check in on their guests. Sometimes the pigeons are provided with grain and water, making the tower a free bed and breakfast. In other cases, pigeons ate from the surrounding fields. Never mind AirBnB: this is the true sharing economy.

Pigeon towers are an example of what’s called vernacular architecture—a type of structure that is architecturally unique but has no single creator. Likely passed down by families throughout the ages, the design of the pigeon tower tends to be isomorphic with regional variations. 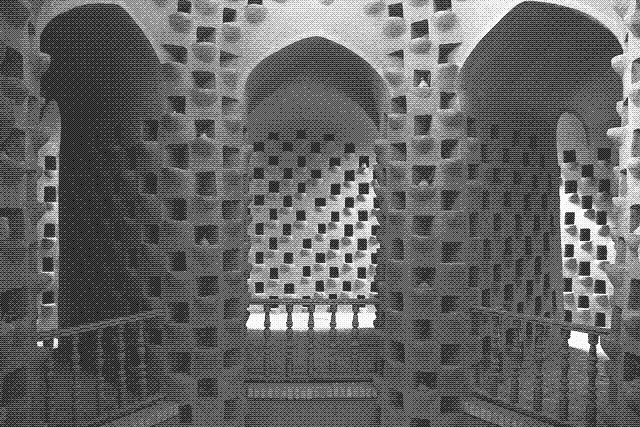 One unique aspect of the Persian pigeon towers is the ledge of the bricks on the inside of the structure. The repetitive feature creates a mesmerizing honeycomb effect, in which the whole becomes greater than the parts. It is also amazingly inventive, in that it enables the maximum number of coves with a minimum of building material. The bands of smooth plaster around the exterior of the tower may seem decorative, but are also highly functional: unlike the rest of the bricks, snakes have trouble climbing up this low-friction surface.

For centuries pigeons played a significant role in the Persian economy and political system. Farming first evolved in Iran 10,000 years ago, and considering this long tradition, the focus has been on sustaining yields over time rather than short-term maximization of profits.2 Pigeon towers became a crucial part of the agricultural economy, providing much-needed fertilizer for melons, cucumbers, and other nitrogen-demanding crops—cornerstones of Persian cuisine. With characteristic enterprise, rulers even taxed owners of pigeon towers—the equivalent of taxing salt or fossil fuels.

Pigeons also featured significantly in Persian culture—to such an extent that most European travelers, starting with Marco Polo, felt the need to make remarks about them in their travel diaries. Pigeon dung was also used to make gunpowder, well before Europeans started playing with explosives.

Most pigeon towers still around today are in the area of Isfahan, the second most populous region in Iran. However, many of these lie in disrepair. There are also pigeon towers in Eastern Turkey, but these differ greatly in their design. These look like small shacks that dot the hillside, but are actually entrances to larger caves dug into the limestone bedrock, providing large empty spaces for the pigeons to nest in. Often villagers will hang baskets in the shacks and caves as nests for the pigeons. These dovecotes are often still in use, but, like the ones in Iran, are more and more falling into disrepair.3

While Iran was almost self-sufficient in food production in the 1960s, the increased use of synthetic fertilizers actually lowered food productivity, as they scorched the thin soil. Water scarcity is increasingly a problem in many areas of Iran—Isfahan being one of them 4, and high-input agriculture is using up most of what’s left.

This confluence of problems indicates the need to start practicing alternatives to high-input agriculture. Despite their decreased use, pigeon towers have some benefits over other low-tech alternatives in use today, such as the practice of some organic farmers to roll chicken coops over their fields. Another example is the flightless Indian runner duck, which some farmers let stampede fields in hordes, laying droppings and eating pests. 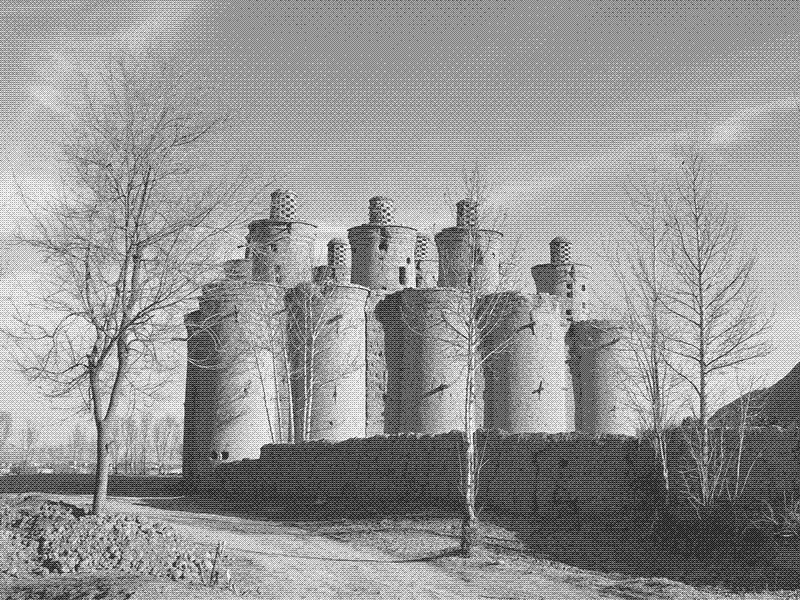 First, unlike chickens or ducks, wild pigeons are extremely low-maintenance. Provide water and shelter, and they will come. A pigeon tower is also stationary: no need to spend the whole day rolling an enormous shed around your field, or herding ducks. Like chickens, you can also eat pigeons and harvest their eggs—although peasants in Iran seemed to have abstained, in part due to the important place of pigeons in Islamic cultures. Best of all, pigeon towers are extremely low-tech: no wheels, electricity, or tractor needed: just bricks and a shovel to harvest the droppings, and some maintenance work every couple hundred years.

They may lie in disrepair today, but pigeon towers stand as monuments to the enduring importance of low-tech solutions to contemporary crises. It’s no surprise that the region that gave birth to agriculture has also refined innovative sustainable agriculture methods for thousands of years. Pigeon towers were one such innovation—and they helped Persian farmers cultivate all kinds of crops on previously arid, thin-soil land.