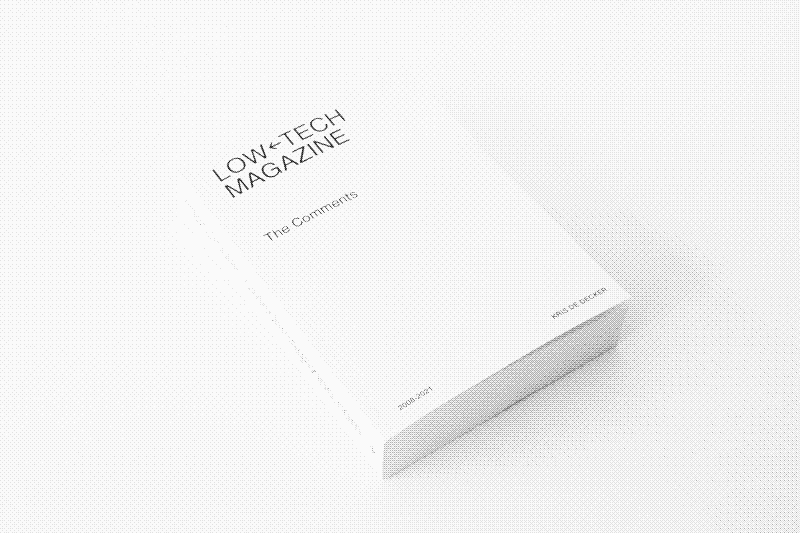 The articles are in the three other books we have made so far:

The book has 688 pages and also includes comments on seven articles that have not appeared in print before. These are at the end, under the header “Previously unprinted articles”. The articles themselves are also included in this case – in a very compact form. The comment sections are ordered from new to old: we start with the most recent article from 2021 and end with the oldest one from 2008.

Comments only appear on the website after moderation, and we made no further edits or selection: all comments that are published on the website are also in the book, as they are. We included all feedback up to November 7, 2021. The comments are not dated. Readers sometimes add feedback years after an article has been published – but they often make that clear in their comment.

This book only contains comments that appeared on the website of Low-tech Magazine. Many more comments have appeared on other websites – such as Hacker News, Metafilter, Reddit, Resilience, Slashdot, The Oil Drum, and Treehugger – but these are not included. However, in many cases, I have pasted the links to those web pages in the comments myself.

Few books allow readers to add content. This one is different. If you read a comment that you want to react to, or if you have a thought about an article that you read, send a comment to solar@lowtechmagazine.com. Your comment – if accepted – will appear on the website and in the next edition of the book. Our printer allows books of up to 800 pages, so there is room for further debate.

Over the years, readers have often stated that the comments on the website are (at least) as interesting as the articles themselves. We agree. Low-tech Magazine would not have been even half what it is now without the comments. You can even take this literally, because the comments take more space than the articles. This is one of the thickest books we have published so far, despite the extra small font we use.

For me as a writer, the ceaseless feedback has proved particularly valuable. First, because comments quickly point out errors and inconsistencies in the articles. Especially in the first days and weeks after publication, the comments often prompt me to make adjustments. In some cases, the feedback made me rewrite several paragraphs or even rewrite an entire article.

With so many knowledgeable readers following Low-tech Magazine, each with their expertise, the commenting process sometimes resembles the peer review process for academic articles. By the time an article appears in print, it has been commented upon by an average of 30 people – a multiple of that number if the comments on other websites are included.

Second, the comments have proven to be a precious source of information and inspiration. More than one article has been born out of a single comment or comment thread. Some comments have turned out as complete articles in themselves.

A Work of the Commons

Legally, this book is in a grey zone. If people agree to have their comment published on a website, does that also mean that it can appear in a printed version of that website? Strictly applied, copyright legislation seems to suggest that we need to obtain permission from each commentator. However, this means that a book like this could never be made. In most cases, we don’t know who the commentators are, nor how to reach them.

A look at the contributors’ list in the book shows that many people use a fake or anonymous name to make a comment. Among the 1,600 contributors are ‘Jason In Canada’, ‘Matt in Oklahoma’, ‘lazyreader’, ‘whateveryoneisthinking’, ‘Remarksman’, and ‘YourNameIsRequired’. We don’t even know how many people have sent comments. For example, is “ben” the same person as “Ben”? Is “Ben” just one person, or are there more commentators who call themselves “Ben”?

Many people also use anonymous email addresses or do not provide an email address at all. Furthermore, since we switched to email as a comments medium in 2018, we systematically delete all messages after the comment has been published on the website. This is part of our privacy policy. Hypothetically, even if we would be able to contact everyone, it would be very unlikely that all or even most people would reply. We would be left with incomplete discussions, which make little sense to print.

Common sense says that the great majority of commentators will have no objection to appearing in the printed version of the website – on the contrary. Nevertheless, if you do object to the printed version of your comment, please contact me. We can make the comment unreadable and print a new version of the book – a small effort since the book is printed on demand. Proving that you actually wrote a comment may be difficult, for the same reasons that we have great difficulty contacting you. The truth is that nobody really knows who wrote this book. It’s a work of the commons.

To make a comment on this post, please send an e-mail to solar (at) lowtechmagazine (dot) com. Your e-mail address is not used for other purposes, and will be deleted after the comment is published. If you don’t want your real name to be published, sign the e-mail with the name you want to appear.