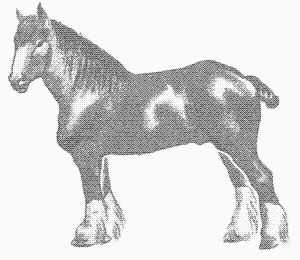 Replacing tractors with real horse power could be the revolution that agriculture needs.

Horses and other draft and pack animals revolutionized transportation, war, hunting, manufacturing and agriculture. Work horses formed the backbone of industrial society until the first decennia of the 20th century, mining coal, ploughing fields and transporting goods and people in fast growing cities.

Reintroducing horses in city traffic would be a bad idea - cars might be noisy, dangerous and polluting, but mounts are even worse. In agriculture, however, animal power would bring surprisingly large environmental profits.

Replacing tractors with horses does not mean going back to the middle ages, nor does it exclude heavy machinery, high yields or high-tech

For several thousands of years, horses, donkeys, mules, oxen, camels, buffaloes, llamas and elephants were the only means of transportation, next to walking. Animals pulled carts and sledges loaded with goods or people, and trains of pack animals crossed hundreds of kilometres of mountain ranges, jungles and deserts.

The arrival of railways and steam machines in the 19th century raised the need for animal transport over short and medium distances substantially. Railways, steamships and factories generated a lot of extra freight traffic.

Work horses were responsible for the shunting of steam trains and for the hauling of coal to stations and factories. In the mines coal was transported by thousands of horses who never saw daylight. The rapidly growing human population in cities was transported by horse cabs, omnibuses and trams. 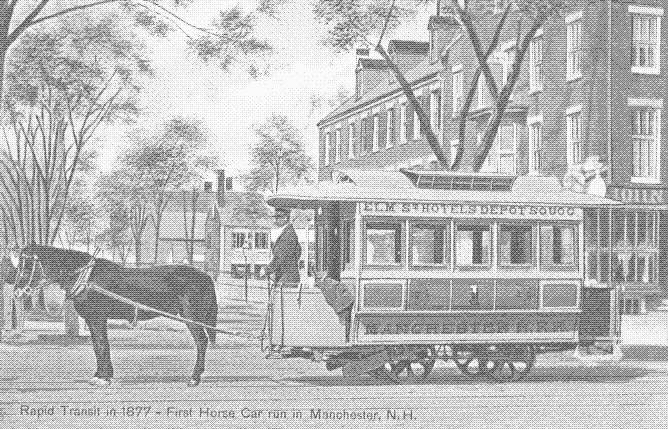 Not all of these horses were on the streets at the same time, since the animals worked in shifts. Still, at the end of the nineteenth century, the horse population in cities like London and New York became so large that health problems emerged.

Dung in the City

In 1880, the 12,500 horses in a small city like Milwaukee (then 350,000 people) produced 133 tonnes of manure each day – more than 10 kilograms per horse per day. That means that the horse population in London must have produced around 3,000 tonnes of dung per day, of which a substantial amount landed on the paving-stones. On dry days, the muck became dust that stuck to people’s faces and clothes. On rainy days, streets were transformed in open sewers. 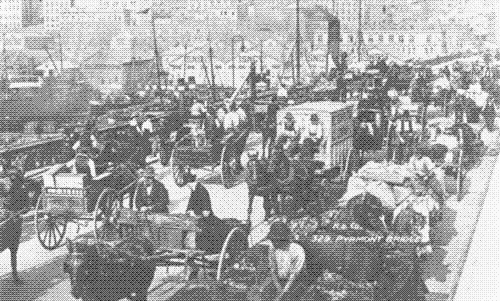 Apart from pollution, thousands of iron horseshoes and wheels must have made a terrible racket, and traffic accidents were no less frequent than they are today. Moreover, being a horse in the city at the end of the 19th century was not an enviable fate. Pulling carriages crammed with people or goods (sometimes with weights of over ten tons) on dirty and slippery cobble-stones was so exhausting that most animals dropped dead after just a few years of work.

Tractors don’t reproduce, and they don’t fertilize the soil

While using pack and draft animals for long distance travel might not be such a bad idea (at least it’s good to know that the end of oil does not necessarily mean the end of international trade), reintroducing horses or other animals in city traffic would be plain crazy. However, the principal reason why horse power is unsuited for city traffic - dung - turns out to be a very interesting quality when it comes to agriculture.

Replacing tractors with horses would be a good move since horse manure is a perfect fertilizer for agricultural soil. Since tractors don’t produce excrements, fertilizers have to come from somewhere else. That can be manure from animals which are being raised for their meat, or (mostly) artificial fertilizers. In both cases, it takes additional fossil fuels to fertilize the soil – for transporting animal manure to the fields, or for manufacturing fossil fuel based fertilizers (and transporting them too). 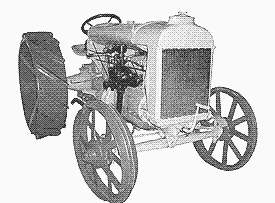 Horses have more advantages over tractors. They reproduce themselves, while tractors don’t. That means more oil saved, and other resources like water and metals, because if you switch to horses you don’t have to manufacture tractors. And while tractors need fossil fuels to operate, horses don’t. Large tractors have engines of up to 500 horsepower, which makes them consume up to twice as much fuel as a large SUV.

Switching (back) from tractors to horses would make agriculture almost completely independent of oil and minerals – and that could make quite a difference in a world that is (according to many) running out of fossil fuels and minerals. Horses could mean food security, without any need for importing anything. Moreover, horses don’t emit greenhouse gases worth mentioning (contrary to ruminants like cows) and they don’t pollute the air. Horses might be the solution that agriculture needs.

Of course, horses need energy too. No fossil energy, but food. This means that replacing tractors with horses would raise the need for additional agricultural land to grow feed for the animals (land that in turn has to be cultivated by extra horses).

This calculation was done in a study published in the ‘American Journal of Alternative Agriculture’, eight years ago. With oil prices almost 4 times lower than today, the researchers might as well have been talking to a brick wall.

Today, however, amidst alarming reports on peak oil and food shortages, their findings sound very appealing. Based on the amount of horses relative to crop area in Northern America in 1920 (when only 3.6 percent of farms had a tractor), as well as the amount of horses operated in 1997 on Amish farms, the researchers calculated that America would now need 23 million horses to cultivate the present 147 million hectares of farmland.

Taking into account the annual feeds for work horses (1,300 kg of corn grain, 1,600 kg of alfalfa and 500 kg of harvested roughage) and the national yields for these crops during the past decade, they conclude that the 23 million horses would require 9 million hectare of agricultural land for food, or 6 percent of US cropland. To “feed” the tractors with crops, 7.4 million hectares of agricultural land is needed, or 5 percent of cropland, which makes tractors slightly more efficient than horses.

To make a fair comparison, however, it should also be taken into account that horses make their own fertilizer without any extra energy input and that they reproduce themselves, while tractors need artificial fertilizers and have to be manufactured (and replaced). The researchers express these energy needs in terms of cropland requirements, to be able to compare them with the other results (they take the view that the fertilizers and tractors are produced with energy delivered by energy crops). They also included the energy needed to turn crops into fodder.

The cropland needed to feed the horses then rises to 16 million hectare or 11 percent of US cropland (because of the energy needed to produce fodder from crops), while the cropland needed to “feed” and manufacture the tractors rises to 38 million hectares or 26 percent of American cropland. Conclusion: when everything is taken into account, powering agriculture with tractors requires almost 2.5 times more energy than powering agriculture with horses.

A Swedish study published in 2002 came to similar results: it concluded that a tractor-based agriculture consumes 67 percent more energy than a horse-based agriculture. The Swedish also calculated that the energy input in (local) agriculture increased 13-fold from 1927 to 1981, while total agricultural production in 1981 was only 2.4 times that in 1927. Find a link to the full pdf of the Swedish studies here.

Replacing tractors with horses is not without challenges, though. First of all, there are not enough horses or other draft animals around. Currently, there are some 9 million horses in the United States. If we want to reintroduce horses somewhere in the near future – say, when the oil runs out or becomes prohibitively expensive – we better start breeding.

Secondly, only a small share of those animals are work or draft horses, one ton muscular beasts with massive hindquarters, who are best suited for pulling weights. If normal riding horses would be used, many more animals are needed. Even if in theory any weight can be pulled by adding more and more light horses, in practice horse spans that are too large become unmanageable.

Horses are not as low-tech and natural as they seem to be. Heavy work horses like the Percheron (picture left), the Belgian, the Shire or the Clydesdale are the result of centuries of cross-breeding by man. Unfortunately, these breeds are not doing so well.

The situation is not as alarming as it was fifty years ago, when many breeds of work horses were on the brink of extinction. Their numbers have risen again, but the population is still small enough to make them vulnerable to genetic deviations. 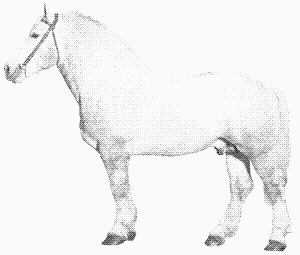 Furthermore, most of them are now bred for their looks only, and these characteristics do not always correspond with agricultural needs or even a good health. If draft horses become extinct, it would take many centuries to get them back on the scene (horse ‘technology’ deteriorated before, after the decline of the ancient empires).

Even if we can breed enough work horses, agriculture would have to change. The advantages of a tractor are speed and convenience. It is easier to steer a tractor than a span of horses, and it goes a lot faster. There is not so much difference in velocity, but because of their larger power, tractors can pull wider and heavier ploughs, so that they don’t have to go up and down the field as many times as a horse span. Using several horse spans at the same time makes up for that, but that also means that you need more farmers.

Horses also need to be taken care of, seven days a week, even when they are not working. And they might drop fertilizer on the field, but they are not evenly distributing it. All of this means that a horse-based agriculture would demand a lot more man power. More people would have to work in agriculture – while today, in industrialized countries, almost nobody works on the field anymore. Encouraging people to watch a horse’s ass instead of a computer screen might prove difficult. 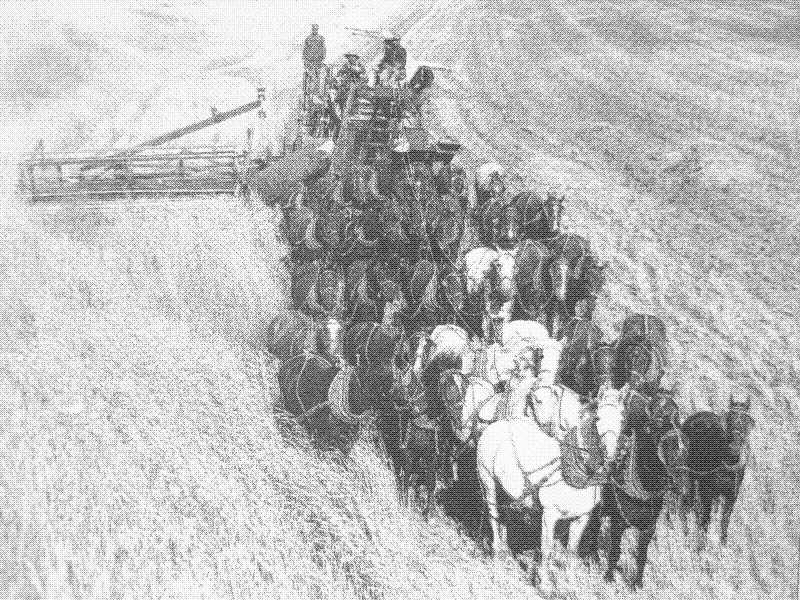 On the other hand, putting tractors in the stable does not mean going back to the middle ages, and it does not exclude heavy machinery, high yields or high-tech. Horses in agriculture are a fairly modern phenomenon. In antiquity and throughout the middle ages, fields were ploughed by oxen. In Europe and in North America horses took over in the 19th century with the introduction of a new generation of machinery that was too heavy for oxen. These machines required much more animal power, but they increased yields and decreased the need for man power substantially. Without tractors.

In the US in the second half of the 19th century, you could see 12-meter wide and 15-ton heavy harvesting machines pulled by spans of up to 40 horses, managed by just 5 or 6 farmers (see picture above). These were mostly riding horses, since most European draft horses were only imported at the end of the 19th century (these purebred animals were usually not working in the field, but only used to “upgrade” the existing horse population). Today, agricultural machinery is trimmed to powerful tractors. With 21st century technology, it must be possible to design extremely lightweight machinery that can combine horse power with high yields, high speeds and easy management.

1. Find a link to the full pdf of the Swedish studies here.

2. Excellent article on the history of horsecars.