These are all original, scanned leaflets of the legendary French hippie car “2CV” or “Deux Chevaux” (known as the “duck” or the “goat” in several European countries). In spite of all the high-tech that has been squeezed into cars since then, the 2CV from 1949 is still more energy efficient than the smallest model of the French car designer today. Why?

“If we really want more energy efficient cars, the 2CV shows us that we need not more, but less technology”

The 2CV was produced from 1949 until 1990 and sold almost exclusively in Europe. At the time of its introduction the car had an engine capacity of 375cc, a maximum power output of 8 horsepower (DIN-HP) and a top speed of 65 kilometres an hour (40 mph).

In spite of the much higher performance (an almost doubling of engine capacity, 4 times as much power output and a top speed almost twice as high) the weight of the hippie car remained the same at about 500 kilograms (sources: 1,2,3)

Today, there is not one car which comes even close to these figures. The smallest model of Citroën now on the market, the C1, weighs 810 kilograms (despite the use of lighter materials). The Citroën C1 has an engine capacity of 998cc and a maximum power output of 68 HP, and it does 157 kilometres an hour (98 mph).

Compared to the first 2CV models, the weight of the smallest Citroën today has almost doubled, while the top speed more than doubled and the maximum power output rose by a factor of eight.

Surprisingly, the fuel consumption remained more or less the same. The C1 consumes 4.6 litres per 100 kilometres (61 miles per gallon), the 2CV consumed on average 4.4 litres (64 miles per gallon). 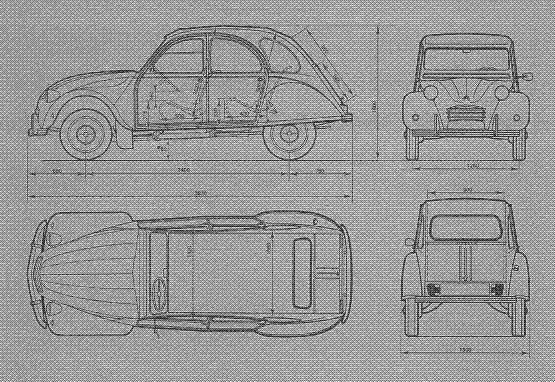 In other words: if we would apply this modern technology in a car that is as light and slow as a 2CV from the fifties, we would now drive cars that scarcely burn any gasoline. Unfortunately, all technological progress was devoured by more weight, more power, more speed, more comfort and more electronics.

Part of the extra weight is the consequence of safety measures. Car manufacturers always hammer at this and of course more safety is a good thing. But, because at the same time the speed of the vehicles has raised substantially, and higher speeds mean more serious accidents, part of this progress is negated - just like the higher energy efficiency is negated by the higher performance. Moreover, safety belts are still the most important reason why traffic deaths plummeted since the seventies, and the weight of that mechanism is limited.

Another reason for the higher weight and energy consumption is the advancement of comfort and electronics. The first 2CVs hardly had a dashboard that was worthy of the name. The vehicles had no heating or air-conditioning - there was not even a fuel gauge.

If you wanted to know how much gasoline you had left, you had to stop and poke a dipstick into the fuel tank.

If you wanted to know how much gasoline you had left, you had to stop and poke a dipstick into the fuel tank. Until the sixties, the windscreen wipers were driven by the wheels - and therefore did not work when the car was not moving (unless you powered them by hand). 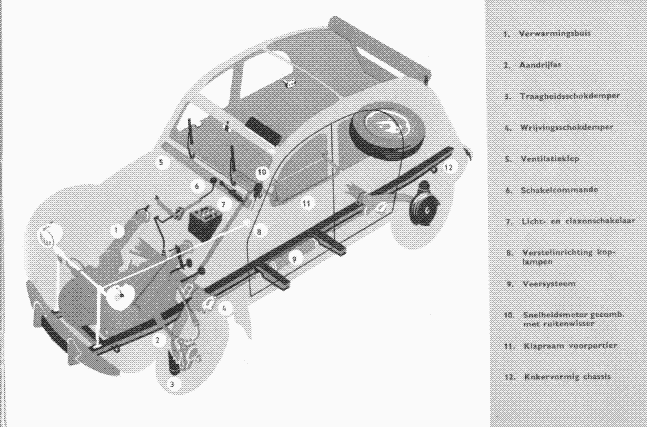 The windows of the 2CV could not even be opened mechanically, let alone by electricity: they were pushed open with your elbow. In today’s cars all these applications (and dozens of new applications) are run by their own electric motor.

These electronics push up energy consumption because they raise the weight of the car and because they consume energy themselves (electricity which is delivered by the combustion engine). If we really want more energy efficient cars, the 2CV shows us that we need not more, but less technology.

These sites have more information on the Citroën 2CV (in English).

Also check out the brochures of the Panhard, the Hoffmann 2CV, the Dyane, the AMI, the plastic Mehari and other Citroën models.