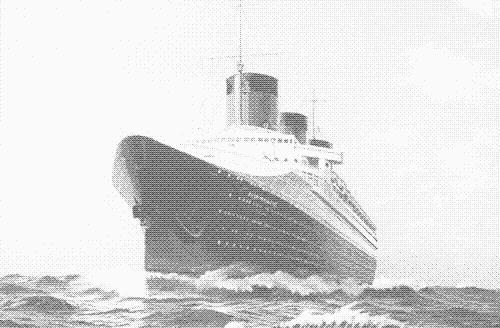 Flying has become cheaper than taking a train or driving a car. Yet, environmental concerns, dwindling fuel reserves and fast rising kerosene prices are threatening to turn airline travel into a privilege for the rich again.

This should not mean the end of mass travel or tourism, however. Before mass air travel took off in the 1960s, people crossed the globe in majestic passenger ships. Reintroducing ocean liners would be more than a nostalgic move: it could be a much more energy efficient (yet slower) way to travel.

Before mass air travel took off in the 1960s, people crossed the globe in majestic passenger ships.

Airlines all over the world are struggling to lower the energy consumption of their machines - by designing lighter planes and more efficient engines, by getting rid of needless weight inside the cabin, or by flying at lower speeds.

At the same time, they started investigating alternative fuels like algae, coconut oil, hydrogen and solar power. None of these things will save cheap airline travel when kerosene prices keep going up, though. There is a limit to energy efficiency, and alternative fuels for airplanes are highly speculative; maybe we should first try and see if we could run our cars on “green” fuels without destroying the environment before we try to implement them in jumbo jets. There is no alternative for kerosene.

It has been said that there are no alternatives to airplanes either, when it comes to long distance travel. This might be true, but this alternative once existed and it disappeared because of planes. From the mid-19th century to the 1960s, millions of people crossed the oceans on passenger ships. Many hundreds of ocean liners were built. Most of these passenger ships were rather small and slow, but the superliners travelling the North Atlantic between Europe and North America were fast vessels with a much larger passenger capacity than that of a present plane (thesesites have a good overview of historical ocean liners). 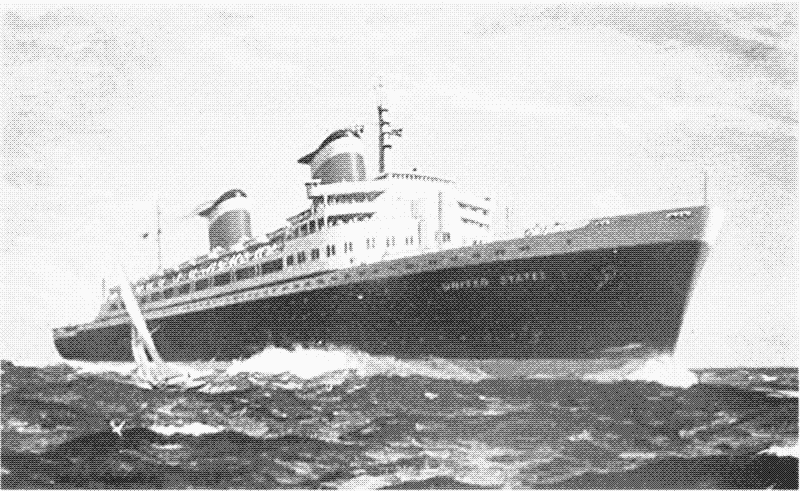 Motorised ships (first running on ~~steam~~ coal, later on diesel) brought a spectacular improvement in speed and reliability. While a sailing ship needed one to two months to cross the Atlantic, the first steamships made the journey in just 15 days. Steamships also made travelling times predictable, so that regular services could be established.

Both speed and passenger capacity went up fast during the following one hundred years. The SS United States, which was in service from 1952 to 1969, still holds the record for the fastest ocean liner ever built: she (ocean liners are female) crossed the Atlantic in 3 days and 12 hours, at a speed of more than 54 km/h. That’s 10 to 20 times faster than a sailing ship.

Contrary to present cruise ships, ocean liners were built for speed. Nations were in a constant race to possess the fastest passenger ship. Ocean liners brought thousands of European immigrants to the US, Australia and Canada. They caused a modest tourist boom in the 1920s and they served as the most important means of transportation between European countries and their colonies.

Yet, the fast growth of ocean liner traffic came to a rather abrupt end when cheap and fast air travel took off. Propeller driven aircraft like the DC-3, which were used in the 1930s and 1940s, revolutionised travel at medium distances, but their speed (240km/h) and range (1,650 km) were still too limited to present a danger for transatlantic ocean liners. With the arrival of jet powered planes at the end of the 1950s, however, ocean liners lost their reason for existence.

The death of distance

Most passenger ships were taken out of service in the 1960s - some were converted to cruise ships. Travelling at speeds of 900 km/h, jet powered planes lowered the travelling time between New York and London to less than 8 hours – 10 times faster than the SS United States. Jet engines killed distance: today, at least in theory, every place on Earth can be reached in less than 24 hours time.

Ferries take not only passengers on board but also their cars. Since the cars take more space and weigh more than the passengers, this is a very inefficient way of transporting people

However, it is interesting to note that distances shrunk at least as much by switching from sailing ships to ocean liners (which also introduced predictable travelling times) as they did by changing from ocean liners to planes.Today, there is only one ship left that services transatlantic crossings: the Queen Mary 2. Taking this gigantic ship as an example, replacing air travel by ocean liners does not seem to make a big difference. At service speed, the ship has an engine output of 90,000 kilowatts. Since she can take 2,620 passengers, this comes down to 34 kilowatts per passenger.

Energy output does not say all there is to say about fuel consumption however, since it does not take into account the duration of the trip and the fuel efficiency of the engines. It says even less about the emissions of toxic fumes and CO2, because marine engines burn much dirtier fuel than aeroplanes. Therefore, to make a case for a revival of ocean liners, more spectacular gains are needed. These are not hard to find.

While passengers in a plane are squeezed together like sardines, the use of space on a ship like the Queen Mary 2 is far from optimal. The ship might have the speed of an ocean liner, but she is built like a cruise vessel. The Queen Mary 2 shows off 15 restaurants and bars, 5 swimming pools, a casino, a ballroom, a theatre and a planetarium, to give some examples. It has cabins with balconies. In a plane, each passenger is folded into a seat - and that’s it.

Image: Cross-section of the Queen Mary 2 compared to the Titanic and to the Airbus A 380, currently the largest passenger plane with a capacity of up to 850 people.

This would make transatlantic shipping definitely more eco-friendly than air travel, even without cleaner and more efficient engines. The Queen Mary 2 transporting 500,000 people would boil down to a power output of 0.18 kilowatts per passenger – comparable to the output of a well-trained cyclist and 700 times more efficient than the engine power per passenger of an airplane. Taking into account the duration of the voyages, the ship scores 70 times better than the plane.

Surprisingly, there are a few passenger boats that achieve similar figures. The best example is the Staten Islandferry, a passenger service that runs between Manhattan and Staten Island in New York. Ferries generally make far from optimal use of space, because almost all of them take not only passengers on board but also their cars.

Since the cars take more space and weigh more than the passengers, ferries are a very inefficient way of transporting people (some of them are also as luxurious as cruise ships). Yet, the Staten Island ferry does not take cars (anymore).

These ferries – which have a passenger capacity of up to 6,000 people - have a gross tonnage per passenger of 0.38 to 0.55 GT. That’s only slightly more than the available space on a jumbo jet. Of course, a trip on the Staten Island ferry only takes 25 minutes, and crossing the Atlantic folded in an airplane seat takes less than 10 hours. Stuffing 500,000 people in the Queen Mary would be a bit optimistic, because the trip would take more than 3 days – a bit of walking space might be very welcome.

Transporting more passengers also means you have to take more food and more lifeboats, and it would mean significantly more garbage. Therefore, let’s change those 500,000 theoretical passengers into only 30,000 passengers. This is not a random number.

The Queen Mary 1, who sailed the Atlantic from 1936 to 1967, was just like many other ocean liners converted to a troopship in World War II, often transporting as many as 15,000 American soldiers. On one trip she took 16,082 soldiers – the largest amount of passengers ever transported on one vessel. The gross tonnage of the Queen Mary 2 is almost two times larger than that of the Queen Mary 1, so it must be possible to transport 2 x 15,000 = 30,000 people on a ship like the Queen Mary 2. This would come down to 5 gross tonnes per passenger and 3 kilowatts of engine power per passenger. 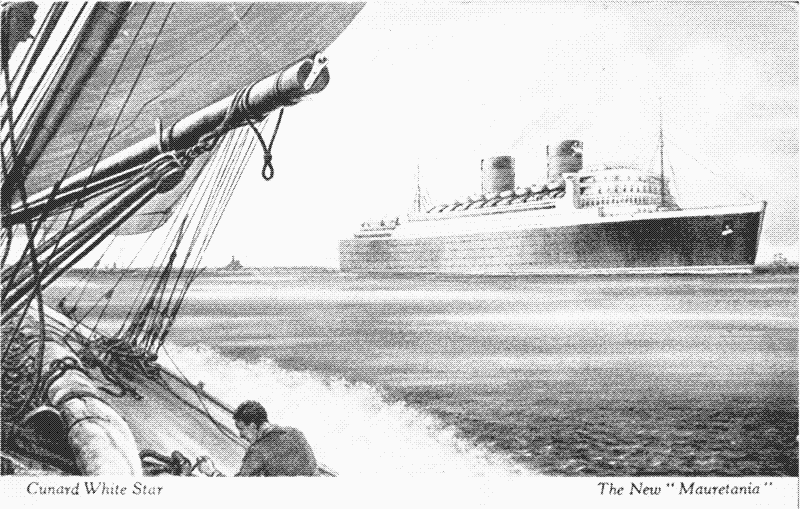 If the passengers of the Queen Mary 2 would have the same moving space as the passengers of the (luxurious) Titanic, the ship could still hold more than 8,000 people, three times more than its capacity today (more, in fact, since older steamships had much larger engine rooms). Therefore, transporting 30,000 people on the QM2 is far from unrealistic or uncomfortable (this is uncomfortable). You would need 60 Jumbo Jets to transport 30,000 people.

Every one of those 30,000 passengers on the Queen Mary 2 would have 20 times as much space than a passenger on a plane, while at the same time consuming 43 times less engine power (taking the view that both engines has similar efficiency). Taking into account the duration of the trip, the ship is 4 times more energy efficient than the plane. Now this looks like an option that could be useful in a peak oil world.

If flying would become too expensive for most of us, passenger ships might continue to provide mass travel and tourism at a democratic price. We would pay another price, of course: the world would become bigger again. London and New York will be 3 days and 12 hours apart. Engineers could design faster ships, but only at the expense of much higher fuel consumption. The majority of fast ships (hovercraft, catamarans, hydrofoils) were taken out of service because of high fuel costs.

Unfortunately, governments and businesses prefer to keep up their faith in larger airports and faster planes as if there is no alternative

Switching back to ocean liners would surely lower long distance passenger travel and change life as we know it, but it would not be the end of modern civilization, nor the end of tourism or business. A weekend of shopping in Paris will be hard if you live in New York and only have 3 days free. But you could still get anywhere you want, if you take the time. Unfortunately, governments and businesses prefer to keep up their belief in ever larger airports and ever faster planes (like the Lapcat) as if there is no alternative.

One very important note: replacing planes by ocean liners would be an ecologically sound idea, but only if marine engines become cleaner. Most ships make use of very dirty (unrefined) diesel oil that needlessly poisons the air and heats up the atmosphere. This is not a technological but a political problem. All we need is (much) stronger regulation (which is on its way).

Wind energy and solar energy can also help to lower the fuel consumption of ships (see these articles on Low-tech Magazine). Other issues to consider are wastewater treatment and garbage disposal – again things that should not be harmful, but at the moment they are because of a lack of sufficient laws and control (read more about the rather sickening practices of cruise ships here).