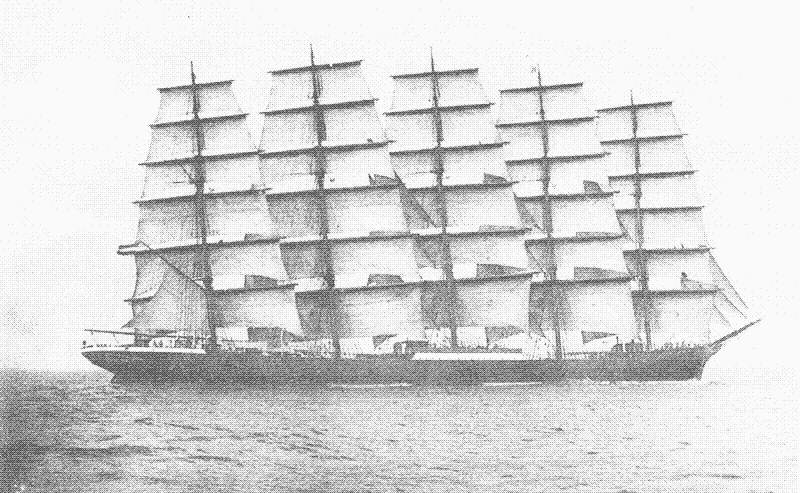 On an early afternoon last month, the Eugen Maersk (the world’s longest ocean freighter at 1,300 feet) has left Rotterdam, the Netherlands, on the tail end of a journey from Shanghai. But the giant freighter is cruising at 10 knots, well shy of her 26-knot top speed. At about half speed, fuel consumption drops to 100-150 tons of fuel a day from 350 tons, saving as much as \$5,000 an hour.

The German Preussen (picture above), the largest sailing ship ever built, was launched in 1902 and travelled mainly between Hamburg (Germany) and Iquique (Chile). It was rammed by a large steam vessel in 1910. A one way trip between Germany and Chile took the cargo vessel between 58 and 79 days. The best average speed over a one way trip was 13.7 knots. The lowest average speed was 10 knots.

One giant container ship can emit almost the same amount of cancer and asthma-causing chemicals as 50 millioncars, study finds. Time for a new age of sail.

To make a comment, please send an e-mail to solar (at) lowtechmagazine (dot) com. Your e-mail address is not used for other purposes, and will be deleted after the comment is published. If you don’t want your real name to be published, sign the e-mail with the name you want to appear.

“One giant container ship can emit almost the same amount of cancer and asthma-causing chemicals as 50 million cars, study finds.”

Correct. The problem with cargo ships is that they burn extremely dirty fuel.

We don’t have to go back to sailing boats to solve this: forcing cargo vessels to use diesel that is used by trucks and buses would be an enormous leap forward.

The cost per ton\mile for ocean shipping is far less than any other shipping method. Only rail comes close. Neither method uses the dirty “bunker oil” they did in years past.

So while a ship it might emit the pollution of 50 million cars, it’s also carrying a load that would take a billion cars, so the comparison isn’t really valid.

The reason international trade works on the scale it does is due to cheap oceanic shipping.

Take that away and grain shipments, as well as commodities are no longer economical to ship. Say goodbye to your shopping cart full of low cost goods from China.

Diesel burning engines do not employ catalytic converters, they employ scrubbers in their exhaust stack configurations to reduce pollution, however this process is expensive so they don’t use them, nor do they utilize cleaner fuels,,,, seems they really don’t care about the environment, that is except the one immediately surrounding their pocket books, as is evidenced by the quote that they are saving fuel by slowing down. Hello!!! We don’t care, clean up the air. Produce near home or do without. Somebody, please….. somebody, please bomb us back to the , well almost stone age…..

eeeeeeeeeeg!,, oops sorry, i simply meant to say Please, o Please: o’bomb us back, well almost back to the stone age.

“Take that away and grain shipments, as well as commodities are no longer economical to ship. Say goodbye to your shopping cart full of low cost goods from China.”

There is a definite point to be made in favor of sailships being used to transport cargo like tea, coffee, cocoa and other beverages these days. Other processed foods could also be shipped on sailships - the China Clippers touched speeds as high as 16 knots in the 1860s and the rationale that guided their existence back then, that of shipping valuable, light cargo fast to its destination, still exists. I am not an expert on trading in carbon credits etc but I do think that the already low cost of using sail to transport cargo as compared to using oil could get pushed down even more if sailship owners are allowed to sell carbon credits.

As someone who was born in an old sea-port that saw ships trade from the Roman era in India, I have long wished to see sailships brought back. With modern materials and with the current concerns that the world has over the environment, this is a good time for a potential entrepreneur to look at reviving a new era of sailships. European wine-makers slready ship their wines on sailships in Europe. Now someone just needs to become aggressive and look at shipping cargo across the oceans.

The main reason for the lower speed is probably not (or not only) the cost of fuel, but a lower demand for the goods being transported.

Anyway the WSJ-article I quoted is incorrect, since they state a fuel savings of $5,000 per hour, without mentioning that the trip takes more days if you lower the speed. And $ 5,000 an hour seems wildly exaggerated, if compared to the calculation above.

The size of the ship goes by the volume but the size of the sail only by the area, for example if we double the ship Preussen on all the sides we have 8 times the weight but only 4 times the sail area, so the pushing power per ton of ship is reduced to half so it will go slower.

One of the main arguments against this, I’m guessing, is that fuel oil burned by ships has far more energy/liter than diesel.

I see a future for sailing technology, but not in the traditional way. Economies of scale simply teach us it is cheaper to transport with big ships. It also uses a lot less construction material per ton of capacity to build large ships.

We shouldn’t be looking at traditional masts with sails: they are impractical.

Instead we should drop the masts and just use the sails and ropes without them: We build giant kites.

Kites can be a much higher altitutes than masts allow the sails to be. This means more and more steady wind speeds and thus more power.

Also kites can be used at up to 50 degrees against the wind!

It’s all ready implemented as a hybrid system: http://www.skysails.info/ Look a the videos.

I own a 133’ ship that would make a great sailing ship. You can see my ship in Shutter Island, just came out on DVD. If you know someone that would pay for the conversion I would love to convert it as an example of what could be done. You could carry cargo to the Carbine for charity! souleido@aol.com

Hmmmm, something I don’t see here is:

A container ship can keep a steady 10/15 knots to her destination, I really doubt that a ship of sail can say the same thing.

There is a lot more to calculating a sail’s area to speed ratio then doubling sail = double force.

response to Mansor (#11) below. “if we double the ship Preussen on all the sides we have 8 times the weight but only 4 times the sail area, so the pushing power per ton of ship is reduced to half so it will go slower.”

The hull speed design is a big factor. also Talk to a sailor.

also The force of the wind increases by the square of the velocity, which means that at 14 knots, the wind force on your rigging and sails is double the load on the boat at 10 knots. To get more force for a larger boat you need increased sail area, you are still limited by the hull speed design, unless your going to plane on the water. Unlikely for a cargo carrier.

No mention is made of the difference in cargo capacity, either.

This is an almost twenty-fold capacity increase. Would it be more efficient to have 20 Preussen sized ships, or one of the E-Class Maersk ships?

The primary constraint is labor, a sailing ship of that size requires a very large crew, while the diesel vessel needs very few and most of those can be lower skilled than on the sailing vessel. England didn’t use press gangs to get Navy sailors just because they wanted to, it was because of the difficulty of persuading experienced sailors do enlist.

Better do some research. Start with Alan Villiers’ “The Way of a Ship”. With 7 seasoned sailors and a crew of 12-14 boys. Most cargo carriers sailed with a crew of 18-24 on a two-watch rotation. Olny school ships have an abundance of ‘warm bodies’ to drive the ship. Good captains,firm but fair, didn’t need to ‘shanghai’ crews. Read up on some history-anmourn the loss of men and the knowledge they deveoped over years of experience. Also keep in mind that we did it once and we can do it again if we want to bad enough. My worry is the bureaucracy in ports who add so many costs to the shipping process that it kills profits for the owners/captains/crew.

Sail Ships (Sailing Vessels)are still existing in India and they carry all types of General Cargo, Chemicals, Live Stock etc from Tuticorin to Colombo (Srilanka),Maldives,Lakshadweep Islands (India),West Coast of India, Andaman & Nicobar Islands (India) etc. A 500 ton sailing vessel is manned by 12 crew and they are run both on sails as well auxiliary engine propulsion.The sailing vessels consumes less diesel and mostly run on sails and it is economical and one of the cheapest mode of transportation in India.If any one need more details regarding the present sailing vessel industry in India please contact me at ujamackenna [at] gmail.com

what about SKY SAILS it is better than sails on masts

Very true, the very large crew of a military naval vessel was mainly for the manning of the large number of weapons. Commercial sailing vessels could be operated by very small crews. Some famous clipper ships continued operating into the 20th century, with masts cut down and less sail, carrying goods such as lumber, with crews of 10-15, and half of those apparently shanghaied onto the ship drunk from a bar by the mate..! With modern sail designs and automated handling, the number of crew members is also very low, you don’t have guys scrambling up the masts to reef or unfurl sail, or pulling ropes/cables by hand, etc. With auxiliary engines you remove the problem of handling in port, channels, storms, calm, etc. The technology exists, the problem now is the glut of cheap (and dirty) fuel, so to be realistic, nothing will change until this era ends.