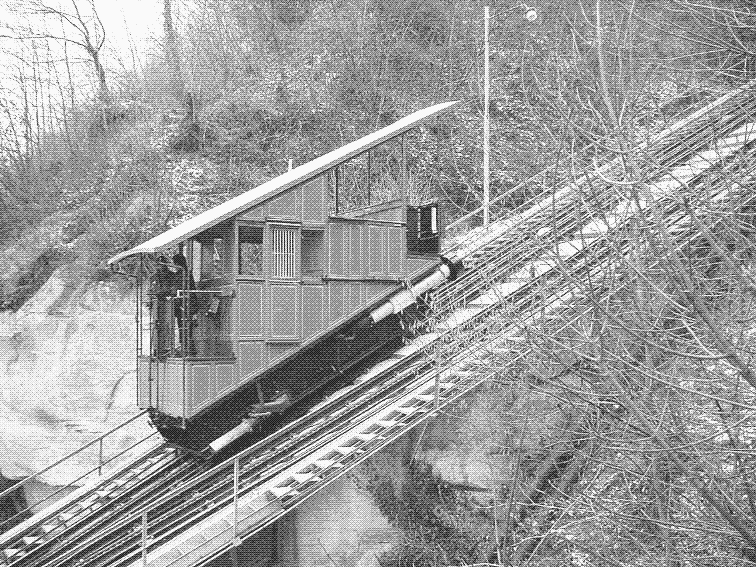 With cable trains, a large portion of the power required to pull up the ascending car is delivered by the counterweight of the descending car.

Many historical systems used this efficiency and took it one step further with systems exclusively powered by water and gravity.

Cable trains first appeared within the second half of the 19th century. Many of them have survived and continue to be utilised (mostly in a modernized form) and new systems are being developed. A cable train system is operated on a steep slope with a gradient of up to 55 percent and consists of two passenger cars which are connected by a steel cable. Both cars travel on the same single track, which is undoubled in the middle so that they can pass each other. 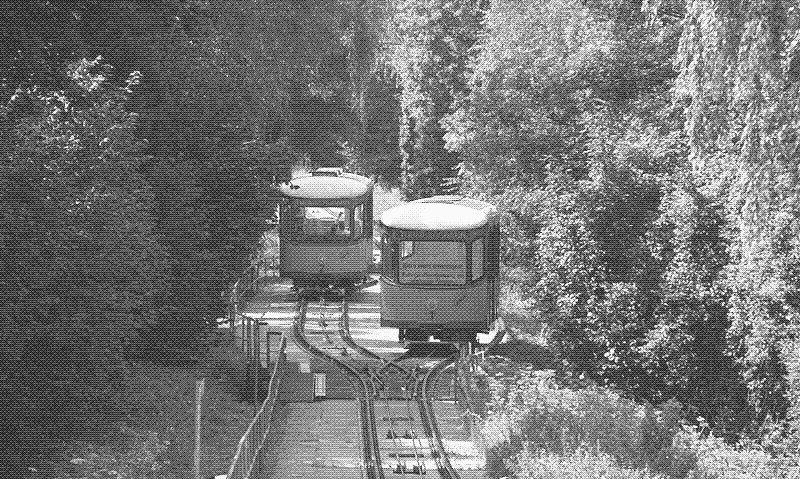 Cable trains prove extremely energy efficient because a large share of the power required to pull up the ascending car is delivered by the counterweight of the descending car. Since the system only needs one track and can go straight up a mountain, it also saves a lot of materials and space (some systems use two tracks but follow the same principle). A funicular should not be confused with a cog wheel train - even though many older cable cars applied a similar mechanism, as a braking system and speed governor, not as a traction method.

Originally, cable train systems were even more energy-efficient than they are today. Instead of using an engine to pull the cable, the extra power required to overcome friction and to pull up the ascending car was delivered by filling the water reservoir of the upper car (see an example of the mechanism below).

Before departure, the employee in the upper station was informed of the number of passengers that had entered the ascending car. He then knew exactly how much water the reservoir of the descending car should contain (around 80 litres per passenger).

Most cable trains using water counterbalanced energy have been replaced by systems that utilise engines. One famous example is the Funiculaire de Montmartre in Paris, France, which was operated by water power from 1900 to 1930 and transported one million passengers per year (illustration below). 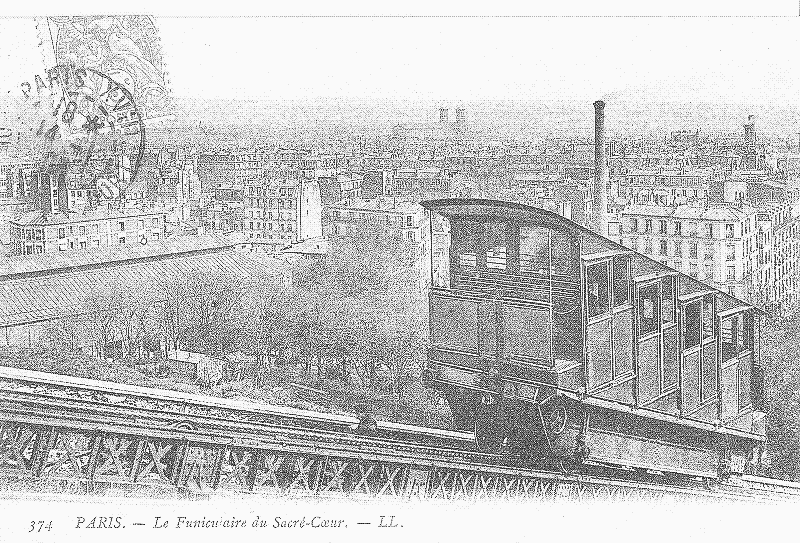 Thankfully, a few water powered cable cars continue to be in service, and have remained so for over a century. The Elevador do Bom Jesus in Braga, Portugal, has been in use since 1882. The Nerobergbahn in Wiesbaden, Germany, has been working since 1888, the Lynton & Lynmouth in North Devon, UK since 1890, and the Funiculaire Neuveville-St.Pierre in Fribourg, Switzerland since 1899 (see picture intro, note the water filling system on the side of the car).

Most water powered cable cars require energy to operate the pump that transports the water up the hill again, so of course, perpetual motion does not exist. There are however some exceptions to this. The 120 metre track in Fribourg, Switzerland, operates without a pump. It makes use of the natural flow of water along the track, more specifically the waste water infrastructure which connects the upper and the lower part of town.

How it works is this (illustration above, source): The waste water flows into a reservoir of 100,000 litres. From there it flows in the water tank of the rail car . Around 1,500 litres of water is required to pull up the other car from 60 meters below, and it takes 3 minutes to fill up the tank. After approximately 1.5 minutes, you will have arrived at the ground station. The reservoir is then emptied and the water continues its way downwards through the sewer system. The train route was designed as a (very creative) way to lower the flow of the fountains in the lower part of town.

To add to this, in the case of the Lynton & Lynmouth Cliff Railway, no water is pumped from the bottom to fill the tanks at the top station - the water is taken from a nearby river. Moreover, at this track the method is reversed. Both car tanks are full of water, the tank of the bottom car is partially discharged until the bottom car becomes lighter than the top car, and gravity takes its course (source & more info). The Centre for Alternative Technology built a similar system in 1992 with a lake at the top of the mountain supplying the railway with water. 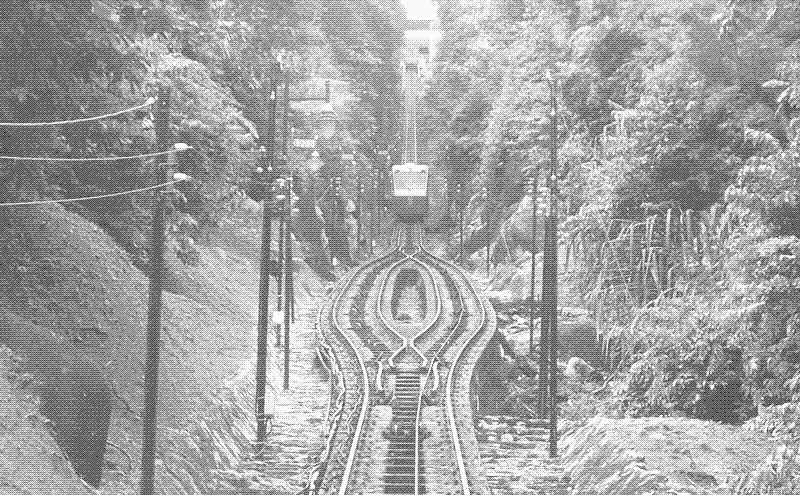 The main disadvantage of a water-balanced railway (just like any other use of hydro power) is that it cannot be operated when the water freezes over. Bummer.

You need a mountain as well, of course.

To make a comment, please send an e-mail to solar (at) lowtechmagazine (dot) com. Your e-mail address is not used for other purposes, and will be deleted after the comment is published. If you don't want your real name to be published, sign the e-mail with the name you want to appear.

One disadvantage of waste water powered cable cars: it smells. As we noticed last weekend in Fribourg.

Good to know, thanks. The Fribourg cable train is the only zero-emission system powered by sewage, though. The Lynton & Lynmouth Cliff Railway and the cable train of the Centre for Alternative Technology make use of clean water (from a lake or river on top of the mountain). So the smell is only a problem of waste water powered cable cars, not water powered cable cars in general.

But it's the sewage that seems to get all the attention:

How does it manage when the gradient of the land changes in between? In that case floor of the train will not be horizontal?

"How does it manage when the gradient of the land changes in between?"

They ask the passengers to hold on tight

As a child in the 1950s we regularly went on the Leas Cliff Railway at Folkestone in Kent. It was definitely water powered as I remember it gushing out when the car reached the bottom.

As far as I know it is still running but I have an idea it might be electrically powered.

There is a new (operational since 1992) water powered funicular at the Centre for Alternative Technology in Machynlleth, Wales. See http://www.funimag.com/funimag19/CAT01.htm

Peter: the CAT funicular was mentioned in the article.

The Bridgenorth Cliff Railway is up for sale.

"How does it manage when the gradient of the land changes in between?"

Could the seas be pivoted horizontally, such as the seats on a Big Wheel (Ferris wheel)?

You could use the wastewater drive system to power elevators.

No mention of this technology in the Americas. But, in Pittsburgh, Pennsylvania they were numerous: https://en.wikipedia.org/wiki/List_of_inclines_in_Pittsburgh

Most had two sets of rails the mountain and I don't recall ever hearing they were water powered.