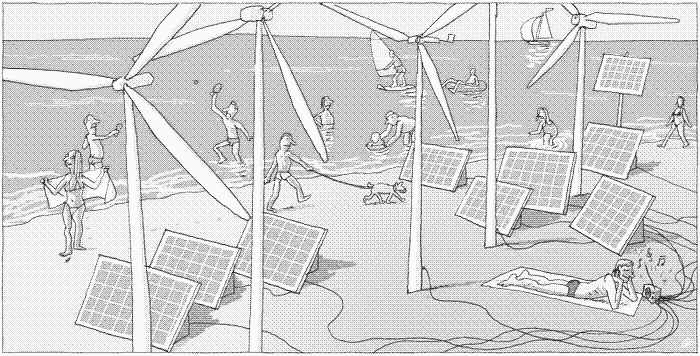 Renewable energy sources do not replace coal, oil or gas plants, they only meet (part of) the growing demand.

In spite of the impressive development of wind power, Spain is now 3 times more dependent on fossil fuels for electricity generation than a decade ago

Regardless of the growing share of renewable energy sources, we burn up more and more fossil fuels every year. This is the case in the US, in Europe and on a global scale, but to make my point I will start by analysing the situation in Spain and in the Netherlands, because both countries are regarded to be an example for their commitment to renewable energy.

Moreover, the Netherlands have a negligible share of nuclear energy and hydropower (green according to some, not green according to others), while in Spain these energy sources have remained unchanged over the last decade, which makes the calculations more clear.

Last week, Spain made headlines around the world with the news that it generated over 53 percent of its electricity by wind power alone, be it during an extremely windy night and only for some hours. There is no denying that the development of wind power in Spain is impressive. Electricity generated by wind power grew with 8,000 percent between 1996 and 2007, from 338 gigawatt-hours (GWh) in 1996 to 27,509 GWh in 2007.

This sounds great, especially when you compare it to the situation in the United States, where the share of renewable energy in electricity production (excluding hydropower*) rose from 1.4 percent to 2.3 percent during the same period (1998-2008, source). Or, on a global scale, where the share of renewables rose from 1.12 percent in 1990 to 2.3 percent in 2006. Yet, just like the Americans and the rest of the world, the Spanish and the Dutch are now more dependent on fossil fuels than a decade ago, not less.

The Spanish would have obtained the same results if they would not have built one wind turbine, but had chosen to limit the rise of energy consumption to 85 TWh instead of the recorded 112 TWh

You could argue that Spain went through an economic boom during the last decade, and that it was merely catching up with the rest of Europe. This is why it is interesting to look at the Netherlands, too, a mature economy.

Of course, things could have been even worse: that is why policymakers and statisticians prefer to talk about “avoided use of fossil energy” and “avoided CO2-emissions”. The reasoning goes as follows: if we would not have built those wind turbines and solar panels, then we would have burnt up even more fossil fuels. But, who are we fooling here?

The Spanish would have “avoided” the same amount of emissions and fossil energy if they would have built not one wind turbine between 1996 and 2007, but had chosen to limit the rise of energy consumption to 84,915 GWh, instead of the recorded 112,086 GWh.

If they would have done that, they would have been just as dependent on fossil fuels as they are today, and they would have emitted the same amount of greenhouse gases as they do today - all this without those 27,171 GWh of wind powered electricity. They would not have made headlines with it, though. Nobody would have noticed.

The same goes for the Dutch: they would have “avoided” the same amount of emissions and fossil energy if they would have limited the rise of energy consumption to 7,000 GWh, instead of the recorded 14,000 GWh.

In fact, this low-tech scenario would have been a more ecological and energy-efficient choice, because both countries would have saved the energy required to produce those renewable energy plants and sources - solar panels, wind turbines and wood pellets. Green electricity is not generated by a “clean” energy source, but by a “cleaner” energy source.

Solar panels, wind turbines and wood pellets do not use gas or coal during their operation, but they do require energy for their production (and since they are mostly produced far away from the place where they are used these figures do not show up in national statistics of energy consumption).

The embodied energy of wind turbines and solar panels is not a problem if they replace non-renewable energy plants. However, this is not the case. We are piling up energy sources.

Mind you: the embodied energy of wind turbines (and solar panels) is not a problem if they replace non-renewable energy plants, because in that case we do save energy and thus make progress. But, this is not the case, so the embodied energy of this added electricity generation capacity is definitely extra energy use.

We do too much

Again, this trend is not limited to Spain and to the Netherlands (see these figures), and what is happening is not a new phenomenon either. What we are doing for more than 100 years now, is piling up energy sources. Today (in the Netherlands, Spain, the US and worldwide) the absolute amount of coal consumed for electricity production is much larger than one century ago, when there was no talk of gas, oil and nuclear. The dirty coal of the beginning of the industrial revolution was not replaced by cleaner gas plants. The gas plants joined the coal plants. 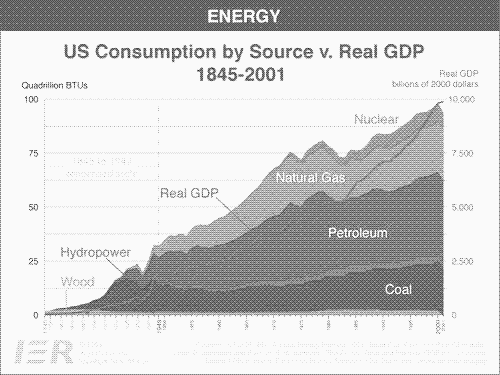 Next, nuclear plants did not replace the existing coal and gas plants, they joined them. Today, with renewable energy, the same thing is happening. They address an energy demand that did not exist before. We use renewable energy sources to power an ever growing plethora of energy-sucking gadgets - and this will not get us anywhere.

Up until now, newer and cleaner energy sources have always been used to enlarge energy production, not to make it “greener” (see for instance the image on the left, depicting US energy consumption from 1845 to 2001, source).

The so-called greening of our electricity production, which generates so much talk, is still 100 percent wishful thinking. We are not one step further than 5, 10, 20 or even 100 years ago. On the contrary, things get worse every day.

All policy objectives are expressed in relative terms - a fruitless approach as long as total energy consumption is on the rise.

The US aims to generate 25 percent of its electricity from renewable sources by 2025 (source). None of their reports describe any goal in absolute figures. This is a fruitless approach as long as total electricity consumption is on the rise.

For instance, imagine that the US indeed realises the very ambitious goal of generating 25 percent of their electricity consumption by renewables, and let’s assume it takes them 5 years longer as planned. According to the projections of the IEA, US electricity demand will grow by 26 percent (16 to 36 percent) from 2007 to 2030. This means that the 3,800,000 GWh of today will be 4,788,000 GWh by 2030. When everything goes to plan, about 1,244,880 GWh of that will then be renewable (that is 3 times the worldwide renewable electricity capacity today). 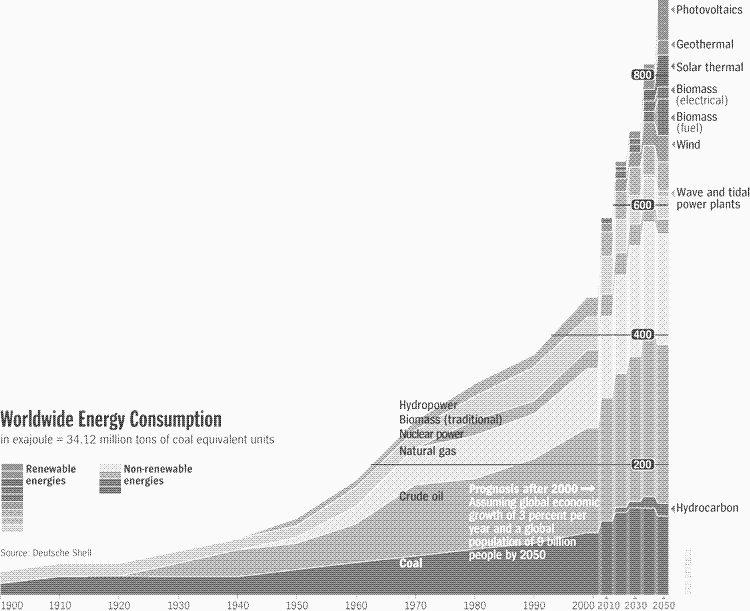 Image: the evolution of worldwide energy use. Source: Der Spiegel.

Yet, the amount of electricity generated by coal and gas doubled in that same period, which comes down to an absolute increase of 6,355,900 GWh. So, we added around 20 times more non-renewable sources than renewable sources. Total global electricity production rose from 8,027,000 Gwh to 18,008,000 Gwh, a rise of 250 percent. If we look at total energy production instead of just electricity production, the preponderance of fossil fuels is even larger (see the image above, courtesy of Der Spiegel).

Much more important than what we do, is what we don’t do.

This trend does not seem to come to an end soon. Last week, the International Energy Agency (IEA) published its “World Energy Outlook 2009“, which looks forward to 2030. According to the organisation, energy consumption will rise by 40 percent between now and 2030. This will happen in spite of the fact that global energy consumption decreased in 2009 owing to the economic crisis. The IEA expects electricity consumption to rise with another 76 percent in 2030, which equals a required capacity of 4,800 gigawatts - almost 5 times the present capacity in the United States.

Even if we succeed in building 4,800 gigawatts of renewable energy in the coming 20 years (something which is rather unrealistic), we would still not be one step further than we are today. What we have to deal with is that which is almost regarded as an unshakable natural law - the non-stop growth of energy use.

How to solve the energy crisis

Don’t get me wrong: all efforts to build and develop renewable energy and energy efficient technology are useful and very necessary. My point is that, by themselves, they will not yield any results. To make them work, we need to put an absolute limit to energy use.

Imagine that the European Union or the US would decide that in 2020 we can only use as much energy (or electricity) as we do today. Interestingly, all other efforts suddenly make sense. If the share of renewable energy would rise, then the share of non-renewable energy would automatically fall. Energy efficient technology would be automatically transformed in energy savings, and not in extra applications or performance, as it happens now (the energy efficiency paradox).

In this scenario, with every small step forward in renewable energy production and energy efficient technology, we would become less and less dependent on fossil fuels, and we would emit less and less greenhouse gases. Moreover, it is hard to call this measure drastic or radical: if we can manage today with 18,008,000 Gwh, why not in 2030?

What more energy-sucking gadgets do we need? By the way, we can keep developing new products and services as we please, we will only have to make sure that these are energy efficient. Considering the amount of energy that is now wasted by most products and services, there is lots of room for innovation, improvement, and thus economic growth.

If we put an absolute limit to energy use, all other efforts (renewable energy sources, energy-efficient technology) suddenly make sense

Right now we try to match our energy production to an ever increasing demand. But, we could also try to match our demand to a fixed supply. Considering the circumstances, this would be a much more realistic and intelligent strategy. An even better strategy is the “oil depletion protocol“, an idea of author Richard Heinberg.

He proposes an international agreement to lower oil production and consumption each year with 2.6 percent. We can wait until the geological, economical or geopolitical reality lowers the availability of fossil fuels, but if we anticipate that reality now then we definitely have more of a chance to make a successful transition to a durable, less energy-intensive society.

Last, but not least, the IEA notes that the rise of energy use is largely on account of non-western countries, with China ahead. But, this does not clear us at all. As the IEA calculated in a former report, almost 30 percent of energy use in China comes from the production of export goods - from bicycles over jeans to solar panels. 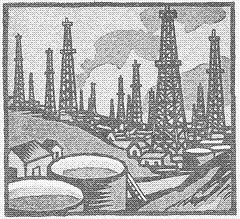 Image: It’s all about fossil fuels.

Western countries succeed in limiting the rise of their energy consumption because they have outsourced ever more energy use. Moreover, the IEA states in its last report, non-OECD countries are, in spite of their high share in current energy use, only responsible for 42 percent of the CO2-emissions since 1890 - with a much bigger population. This means that - in a fair world - we would have to reduce our energy use much more than them.