“While searching for some information about fuel use in aircraft I came across a research report that was eerily similar to your article on electric cars. It looks at all aspects of airline fuel efficiency from pre war days to today, and found that on a per passenger mile basis, the most efficient modern aircraft, the Airbus A380, has just managed to match that which was achieved by the piston engined Lockheed Constellation series in the 1950’s. As with cars, increases in speed have taken away any fuel advantage from jet engines, and it has taken 50 years to get back down to the same MJ per passenger-mile as before the jets. Given the advances in engines, materials and aerodynamics, one can only imagine what a modern version of the turboprop Constellation, flying at the same speed, would be like in terms of efficiency.” 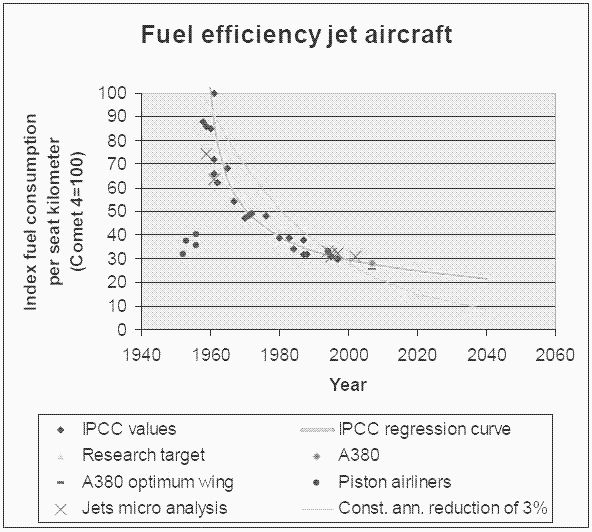 Thanks, Paul. I have nothing more to add. “Fuel efficiency of commercial aircraft“, Dutch National Aerospace Laboratory, November 2005. From the summary:

“This report assesses how the fuel efficiency of commercial aircraft has developed since their introduction in the 1930s. Existing estimates, such as the oft-cited 70% improvement from the IPCC Special Report on Aviation and the Global Atmosphere, ignore the record of the pre-jet era. Based on bottom-up (micro) and top-down (macro) analyses of aircraft fuel efficiency, it can be concluded that the last piston-powered aircraft were as fuel-efficient as the current average jet.”