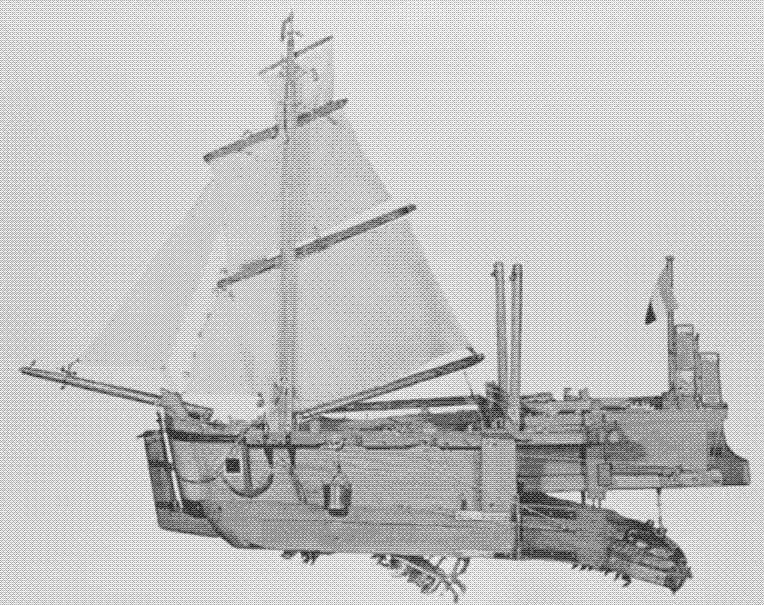 The dredging industry has been the backbone of the Dutch economy for centuries. If canals, harbours and rivers would not be maintained for a few years, the whole country would literally grind to a halt.

Today, dredging happens with oil powered ships, which burn up to 3,000 litres of fuel per hour. However, in earlier times, the Dutch waterways were dredged mostly by hand, using simple but ingenious tools.

Manual dredging was heavy labour, especially when waterways became deeper. Therefore, it was supplemented by animal power, wind power and tidal power. However, in some parts of the Netherlands, people chose a different strategy: they designed a new type of cargo ship that could sail in shallow waterways.

Siltation is a serious problem in the Netherlands, which lies in the delta area of various rivers that supply large amounts of silt and clay particles. At the same time, navigable waterways are essential to maintain transportation and trade — the country is home to the largest port in Europe, Rotterdam.

Each year, some 30 to 35 million m3 of mud are dredged out for the maintenance of the Dutch waterways. Approximately 75% comes from salty waters. In the port of Rotterdam alone, 20 million m3 of mud is collected each year.

The demand for dredging continues to increase. Both inland ships and seagoing vessels continue to get bigger, requiring ever deeper and wider waterways. A “modal shift” policy, in which cargo transport moves from the road to the water in order to improve sustainability and reduce congestion, also leads to more and larger ships, and thus to more dredging. 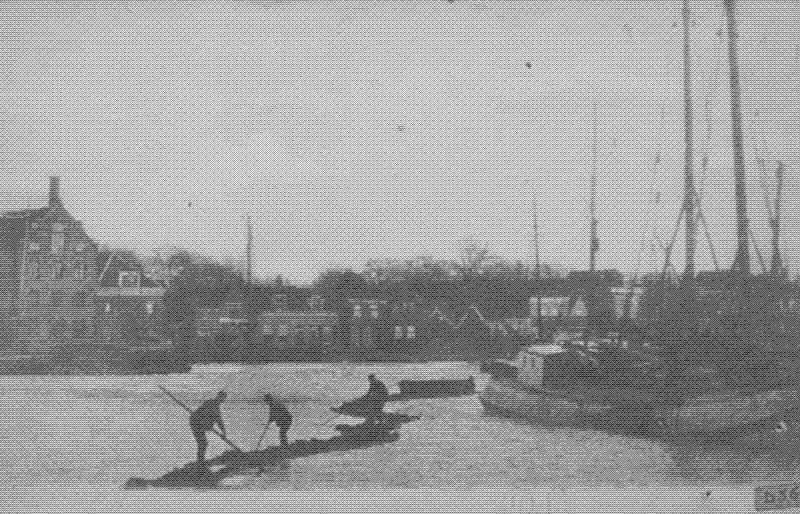 Dredging by hand in Delft, the Netherlands. Image: Maritiem Digitaal.

Although most of the mud is dumped into the sea, each year 3.5 to 5 million m3 of contaminated sediments must be landfilled. Then there is the dependency on fossil fuels. A typical suction hopper dredger has a pumping power of 2,500 kW and removes 100 m3 of sediments per minute. The largest dredgers have 30,000 kW engines and 6,000 kW of pumping power. At full power, these ships consume 3,000 litres of oil per hour.

Dredging a Country by Hand

Silting is a very old problem in the Netherlands, so how did this job happen before the arrival of fossil fuel powered dredging machines and boats?

For centuries, the Netherlands were mainly dredged by hand. Dredgers stood on a small boat and scraped mud from the bottom with their “dredge bag” (“baggerbeugel”). In an alternative configuration, the dredger stood on a wooden board that was supported by the river bank on one side, and by a floating container on the other side. 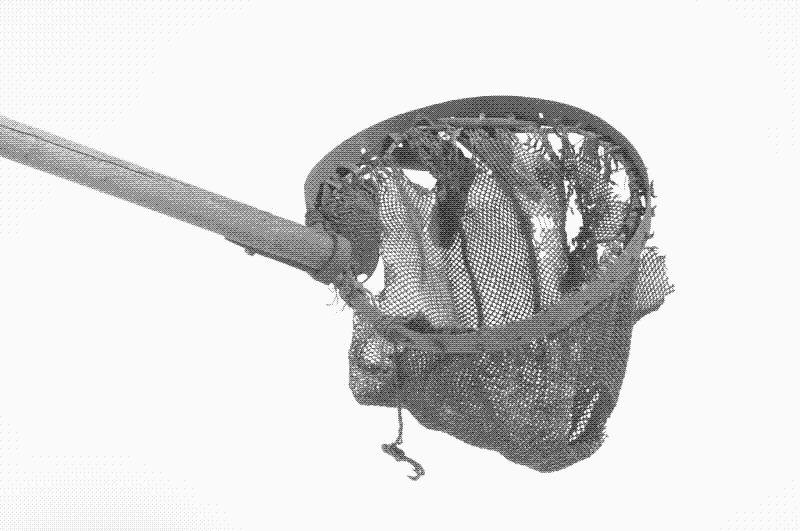 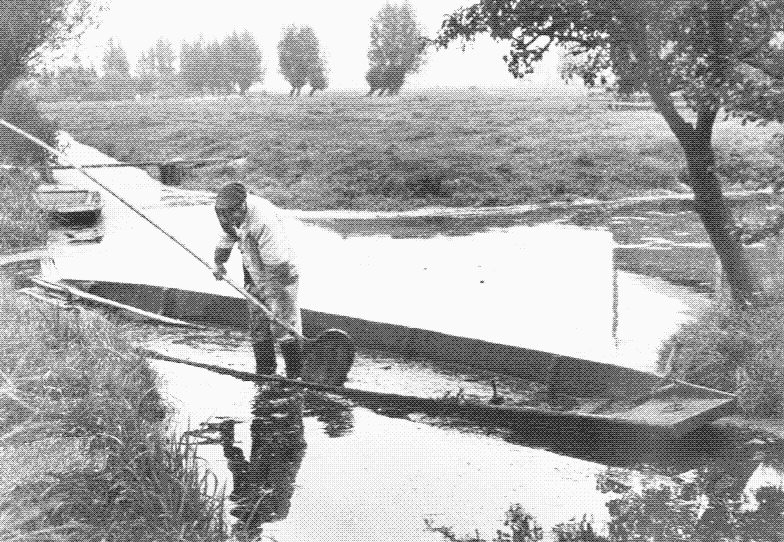 Dredging by hand, standing on a boat. Image. 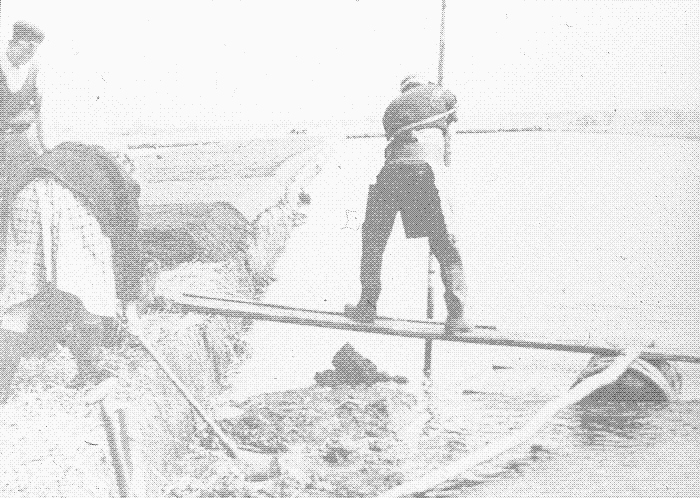 The dredge bag, a tool that was also used for peat cutting, was a long stick (up to 6 metres long) with an annular metal scraper and a net at the end. There were different types of nets and bags, depending on the composition of the sediment. Working with the dredge bag, the handle was rested against the shoulder, so that the net could be dragged over the bottom with two hands.

For large dredging works, thousands of workers with dredging bags were deployed.

The mud was pulled ashore or deposited in a flat barge. For large dredging works, such as the construction of the Northern Holland Canal in 1822-1825, thousands of workers with dredging bags were deployed. Until about 1960, contractors of dredging works employed men with dredging bags for the maintenance of shallow ditches and canals. The tool is still for sale.

Manual dredging is heavy and time-consuming work, so people designed technology that could ease and speed up the task. Furthermore, ships became ever larger. In the last quarter of the sixteenth century, the “dredge mill” was introduced, which worked up to a depth of two metres. It was still based on human power, but now people were merely the power source for a machine.

On a dredge mill, a group of people worked large treadmills or capstans, which drove a paddle wheel that scooped the mud from the bottom and threw it into a barge that was moored across. The dredge mill was usually made up of two flat barges with the rotating wheel in between. These machines were often operated by prisoners. 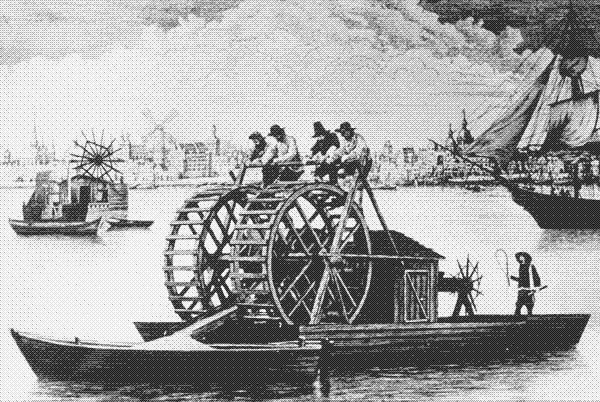 However, one century later, the depth of a merchant ship had increased to between 3.5 and 5 metres — and this was too deep for the human powered dredge mill. In 1622, the first horse-powered dredge mill was built. Three to six horses ran a pivot which set in motion a bucket chain. The horses had to be changed every hour because of the heavy labour involved.

In 1829, horse powered dredge mills could be used to dredge up to a depth of 5-7 metres. If working at a depth of 3.2 metres, with three to six horses, approximately 20 m3 of mud could be collected each hour. By comparison, the average modern suction dredger — which removes 100 m3 of mud per minute — is as powerful as 300 horse powered dredge mills. 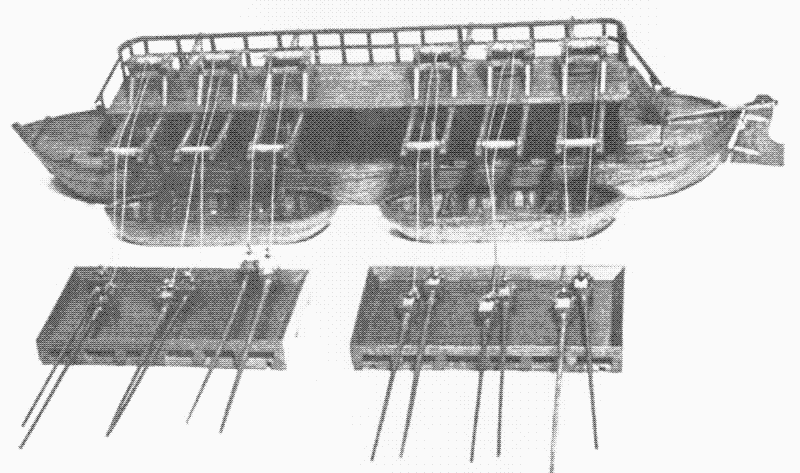 During the first half of the nineteenth century the valve barge was invented. The bottom of this small boat could be opened without causing it to sink. In this way, it took less time to remove the mud. The technique is still used in some modern dredgers. 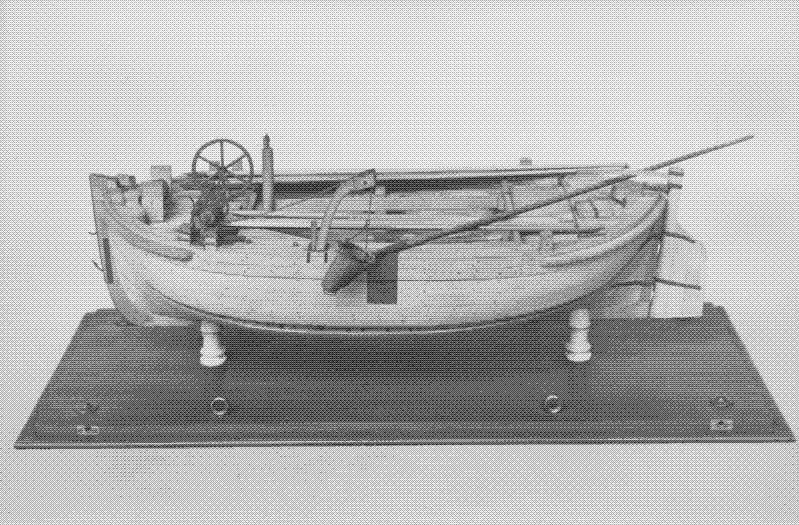 The Dutch also took advantage of renewable energy sources to lighten the work — in particular wind and tidal power. From the fifteenth century onwards, the “scratcher” (“krabbelaar”) was used, a scraper that could dredge gullies if there was enough current.

With a strong current, dredging becomes easier, because the mud only needs to be loosened. The tide ensures the discharge of the material to the sea. 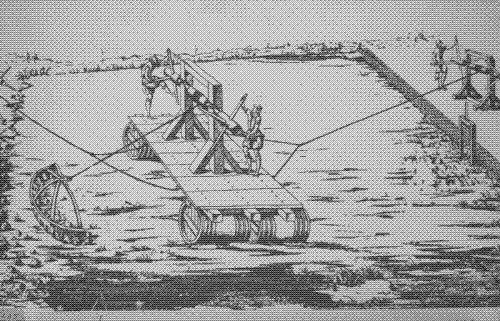 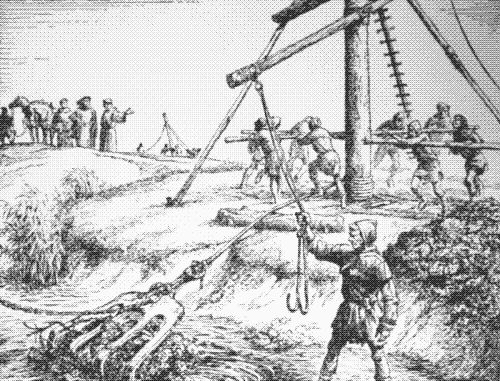 Simple scratchers were a kind of large rakes that were dragged across the bed of the water body. These were pulled by horses or people — some were pulled by a rowing boat.

In harbours with strong winds and tides, scratchers were rigged with sails. These triangular sailing ships had a broad stern and a flat bottom. Attached to the bottom was a harrow with iron spikes. At mid tide, the scratcher was placed just before the lock gates of a scouring basin, which was filled during high tide.

At low tide, the sluice gates of the basin were opened and the scratcher was pushed through the harbour with great force as the iron teeth scraped across the bottom. The ship gathered extra speed through the wide stern and, if the wind was good, the use of sails. Horses could also be used, pulling the ship in the absence of good winds.

At low tide, the sluice gates of the basin were opened and the scratcher was pushed through the harbour with great force as the iron teeth scraped across the bottom.

Wind powered scratchers were in use at least since 1435 in the southeastern part of the Netherlands. The flat bottom of the scratcher hinged and could sink with the help of cables to improve the draft. Two revolving doors, which could make a sharp angle of about 45 degrees with the ship, increased the reach of the barge. 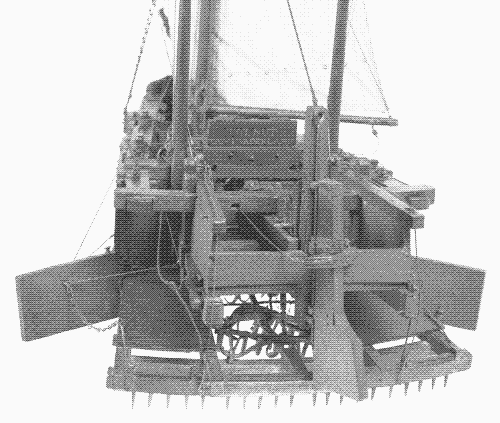 Nevertheless, manpower was still needed. Five to six men kept the monster in the right lane, while two to three men kept the harrow at the desired depth through pulleys and hoist blocks.

Dredging was not the only answer to the siltation of waterways. Until the nineteenth century, the choice was also made to increase the height of river banks and dikes, so that the water level was allowed to rise. This was especially true for large rivers.

In a report from 1825, the dredging of large rivers was not considered a possibility because they were too deep and too wide for the technology of those days. It was only with steam power that dredging was also done on major rivers. 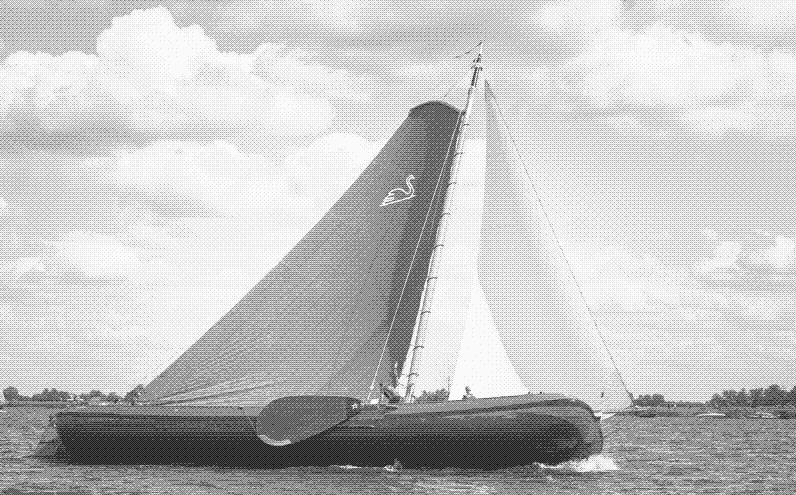 The province of Friesland, in the north of the country, reveals yet another alternative to dredging. The Frisians never used dredge mills, horse mills or other tools than dredge bags. They continued to dredge by hand until the arrival of the steam engine.

However, they innovated in a different way: from 1889 to 1933, they built 1,200 large cargo ships with a very limited draft — the so-called “skûtjes”. Obviously, boats with a smaller draft meant less dredging. The strategy reminds of the medieval Chinese wheelbarrow, which allowed transportation to keep functioning at a time when the road infrastructure was crumbling.

How many people do we need?

In a more sustainable future, could we dredge the Netherlands without fossil fuels? Sustainability is all about cars and smart appliances, but what about large infrastructure and maintenance works? Powering today’s dredgers with solar or wind power sounds unrealistic: those ships would require enormous chemical batteries, which is not practical or sustainable.

Therefore, as part of the Human Power Plant, we investigated how many people would be needed if we were to dredge the Netherlands by hand again. To answer this question, we organised a workshop in which we dredged a piece of Frisian waterway by hand and measured how long it takes to collect 1 m3 of mud. The results are discussed in the video below.