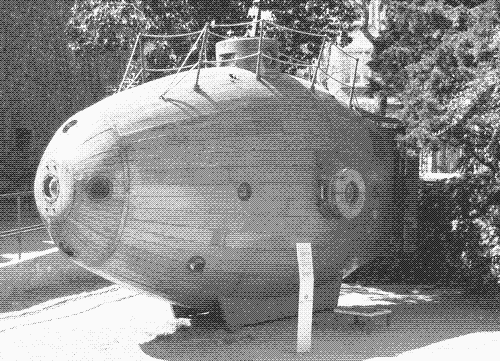 Few Victorian inventions have the grace and charm of the Ictíneo, the series of two wooden submarines built by Narcís Monturiol i Estarrol in the second half of the nineteenth century.

Unlike some of the better known early submarines from his contemporaries in Germany, France and the United States, the Catalan inventor managed to build submarines that operated flawlessly.

The Ictíneo II was the first combustion engine driven submarine ever, pioneering concepts that were only rivalled in the 1940s. Sadly, both submarines were eventually scrapped and Monturiol died penniless and forgotten.

Monturiol’s Ictíneo (derived from the Greek words for fish and for ship) was launched in 1859 in Barcelona harbour to instant success. Monturiol, who possessed no scientific education, became a local hero. The submarine, made of olive wood supported with oak rings and sheathed in two-millimetre thick copper, measured only 23 feet (7 meters) in length and offered hardly enough space for the captain and the four man crew who powered the ship by cranking. 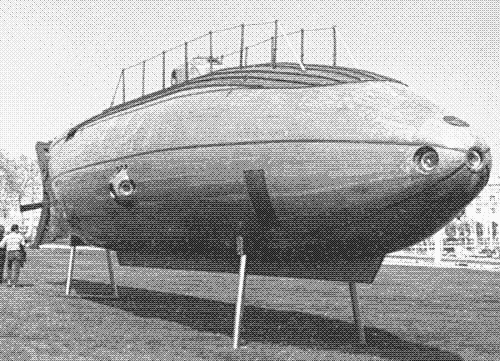 Despite it’s low-tech appearance, the Ictíneo was a marvel of sophisticated technology, decades ahead of its time. The vessel had a double hull - a spherical inner shell that resisted the water pressure, and an outer fish-like shell that protected the submarine and was used for steerage and hydrodynamics.

Between both hulls were four ballast tanks, controlled from within the cabin by valves letting in water or forcing in air. During driving, pitch was controlled by a weight which could be moved along a rail. This micromanagement of buoyancy allowed the Ictíneo to remain at extremely precise depths - a feat which other submarines at that time could not achieve.

Lit by a candle

Monturiol was a man who had safety in mind. Apart from the protective hull, weights could be dropped immediately to surface quickly in case of an emergency. The glass ports on the side, the top and the nose were designed enabling water pressure to push them inside the hull, rendering leaks virtually impossible. 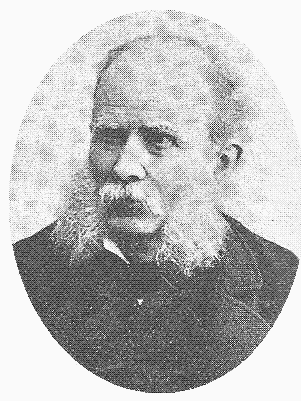 The interior of the submarine was lit by a candle, using up precious oxygen although serving as an integral indicator when oxygen began to run low. Monturiol demonstrated his submarine 59 times, without any adverse incident. The machine could stay submerged for 2 hours and dive up to a depth of 20 meters.

Monturiol was not the first to develop a submarine. The Dutchman Cornelius Jacobszoon Drebbel built some remarkable vessels between 1620 and 1624 based on the unexecuted plans of the 16th century Englishman William Bourne. Essentially, the vessel was an underwater rowing boat enclosed by a leather-covered wooden frame. His final model which had 6 oars, could carry 16 passengers and stay submerged for 3 hours, travelling 5 kilometres down the Thames at a depth of 5 meters. 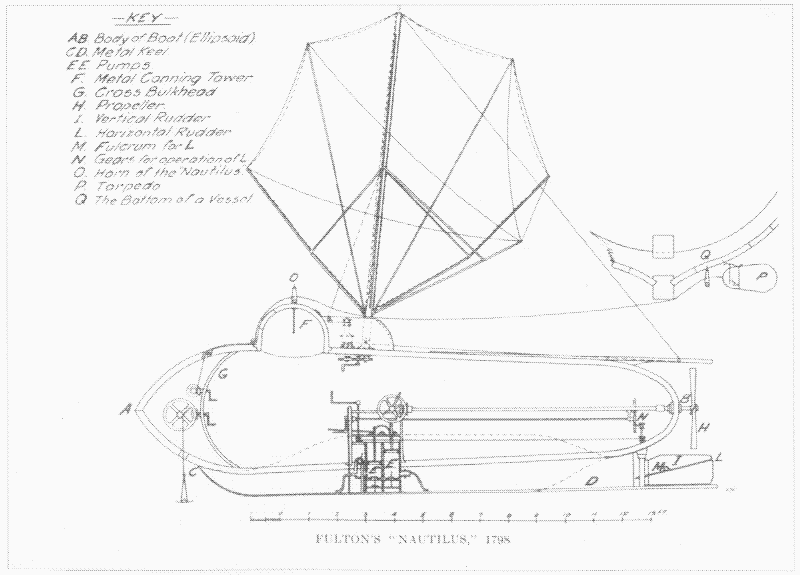 Robert Fulton, an American living in France at the time, designed the successful “Nautilus“, which began testing in the Seine in 1800 (illustration above). It could stay submerged for 5 hours by use of compressed air. The German inventor Wilhem Bauer launched his “Brandtaucher” in 1850 and his “Seeteufel” in 1856 (both of which sank). The American inventor Horace Hunley launched “H.L.Hunley“, the first submarine to sink an enemy warship (and the first to sink 3 times itself, killing 25 people) in 1863, a few years later than Monturiol.

No matter how state-of-the-art the Ictíneo was compared to her many contemporaries, she still had the same basic drawbacks many submarines at the time possessed: a limited range as a result of limited air supply, and a very low speed. All early submarines were propelled by human muscle, which made them extremely slow.

The Nautilus was equipped with a sail, but could obviously only be used when sailing on the surface. Underwater, the ship was propelled by a helical screw, turned by hand. The Ictíneo used pedal power, needing 4 men to reach a speed of 1 mile per hour (about the same speed of the underwater rowing boat designed 3 centuries earlier). That pace was not always sufficient to overcome the effect of currents and tides.

Image: Drawings from the Ictíneo submarine.

Image: Drawings from the Ictíneo submarine.

When the Ictíneo I was crushed by a freighter while docked in the port of Barcelona, Monturiol decided to design a larger submarine that was driven by steam. The Ictíneo II, more than twice the length of the Ictíneo I, was launched between 1864 (with human power) and 1867 (with steam power). It became the first combustion engine driven submarine in the world.

The thinking at the time was that it was almost impossible to run a steam engine underwater because it would use up all the oxygen and convert the inside of the ship into an oven. To overcome this, Monturiol invented a chemical furnace based on a reaction between potassium chlorate, zinc and manganese dioxide - a process that produced enough heat to boil water to run the steam engine. To complement this ingenuity, the reaction gave off oxygen as a by-product.

Monturiol had successfully resolved the two basic obstacles presented to submarine inventors: air supply and mechanical power. In fact, he devised an early form of anaerobic (air-independent) propulsion only to be repeated in the 1940s with the Walter turbine in Germany, and finally with the first atomic submarine, the USS Nautilus. 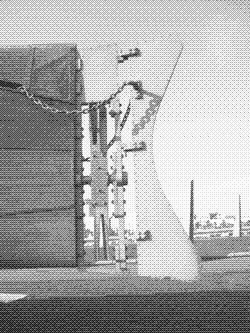 The Ictíneo II was the first of its kind providing its own oxygen, without surfacing regularly or using a snorkel, as seen on the Nautilus. Perplexing is the reality that Monturiol, never having patented his ideas, is absent in many maritime records of the progression of submarines.

On account of all the machinery in the vessel, only 2 men could fit in the submarine originally designed for a crew of 20. The Ictíneo II made almost 20 problem free demonstration drives. It could stay submerged for eight hours and plunge to a depth of 50 meters. Monturiol calculated that the maximum possible depth was 500 meters, but chose not to take the risk of diving to this depth.

In 1868, shortly after its launch, the groundbreaking Ictíneo II was seized by the shipyard and scrapped, together with her predecessor. The reason? Monturiol could not pay the bills.

While his competitors devised submarines for military purposes, Monturiol had alternative ambitions. The man was a communist, a revolutionary and a utopian who regarded his invention as a way of improving the life of the working class. He once witnessed the drowning of a coral diver in the coastal village of Cadaqués and he thought his submarine would make coral diving a much safer endeavour. The Ictíneo II was equipped with arms to retrieve objects from the sea floor. According to other sources, Monturiol regarded the submarine as a tool for exploring the underworld of the deep sea and as a passenger transportation device.

When his search for independant funding proved unsuccessful, Monturiol attempted to sell his invention to the military. He mounted a cannon onto the Ictíneo II in a last effort to attract investment from Madrid, but the Spanish monarchy regarded the wooden fish with apprehension and was not prepared to invest any money into it. In other countries at the time, military factions saw little potential in submarines - their use went against their understood etiquette of war in those times.

Monturiol also tried to sell his invention to the American Navy after he read about the Civil War and their attempts to make submarines, but unfortunately for him, the war was over before a decision could be made.

Ironically, only 30 years later, the Spanish fleet was annihilated by America in the dispute over Cuba, and with it Spain lost the final remnants of its 400 year old world empire. The Spanish vessels were infinitely inferior to their American enemy. Speculatively, an army of submarines may have been able to change the course of history.

Replica’s of both submarines are on display in Barcelona: the Ictíneo I in the garden of the Maritime Museum and the Ictíneo II in the harbour (both pictured above).

To make a comment, please send an e-mail to solar (at) lowtechmagazine (dot) com. Your e-mail address is not used for other purposes, and will be deleted after the comment is published. If you don’t want your real name to be published, sign the e-mail with the name you want to appear.

Using wood would seem primitive and unsafe. However, a wooden frame on a submarine is quite an obvious solution in a region (Catalonia) used to keep liquids (fine wines and olive oil) inside wooden barrels. Making big watertight barrels is a quite sophisticated technology and the level of craftsmanship available in this region was not to be taken lightly. Any local would have felt safer inside a wooden barrel than in an iron one. If given the choice, many wouldn’t have minded dying inside a wine cask, unfortunately the Ictineo was quite dry. As for the copper, its only purpose was to keep shipworms (teredo navalis) from eating the hull and it was normal practice in wooden vessels. It did not provide any structural support.

Beautiful, interesting technology. Something tells me that poor technology management is still an issue today. I wonder if a few failures at the start, heroically overcome, would’ve increased public standing to the point that funding would’ve become easier to obtain?

I don’t think a fleet of submarines alone might’ve turned the war, but the military’s reluctance to even evaluate new technology I would mark as symptomatic to a general failure to keep up with the rest of the world.

There’s a reason DARPA spends so much on whackjob tech experiments. Even if they get plenty of stuff horribly wrong most of the time and even if it all turns out to be generally inefficient, at least they’re working on pushing the envelope. Same thing with the rest of their military. That part of their core business they understand very well, and these guys did not.

It is always a delight to see that the Victorians felt that technology could be beautiful to see as well as utilitarian.

Such an amazing machine.