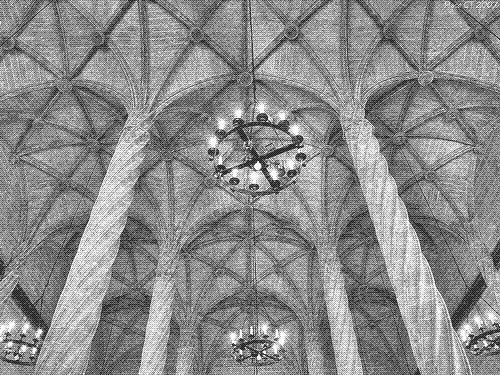 Brick, stone and concrete are materials strong in compression (you can pile them up almost indefinitely), but weak in tension (if the structural breadth increases, the material has to be supported by many columns or it collapses).

Nowadays, this problem is solved by steel structures or the use of steel reinforced concrete - the tensile strength of steel is significantly more than that of bricks, stone or plain concrete. Pre World War II, the weak tensile strength of brick was compensated for by superior craftsmanship.

The “timbrel vault” allowed for structures that today no architect would dare to build without steel reinforcements. The technique was cheap, fast, ecological and durable. 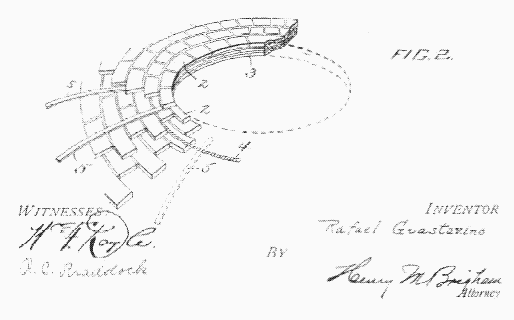 The method of timbrel vaulting was developed in the 14th century around the Mediterranean, although its precise origins are unknown. The timbrel vault is also known as a “masonry vault”, “Catalan vault”, “tiled vault”, “laminated vault”, “flat vault” and “layered vault” (derived from Spanish, French, Italian and Catalonian descriptions).

A roof of tiles

Timbrel vaulting differs substantially from the Roman method of arch building, which relies on gravity. A Roman vault consists of a single layer of thick, wedge-shaped stones (see below). 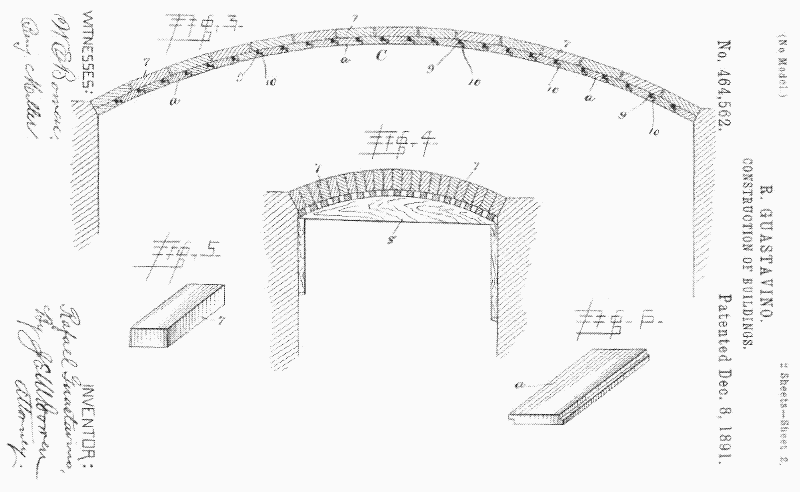 The timbrel vault does not rely on gravity but on the adhesion of several layers of overlapping tiles which are woven together with fast-setting mortar. If just one layer of thin tiles was used, the structure would collapse, but adding two or three layers makes the resulting laminated shell almost as strong as reinforced concrete.

The result defies common sense, because a timbrel vault is very thin compared to a Roman vault, while at the same time it is capable of bearing much higher loads. This of course enables wider spans and gentler curves. 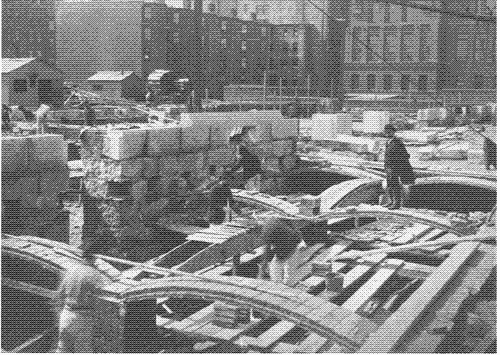 The timbrel vault was perfected in Catalonia, the north-eastern region of Spain. There already were some notable medieval examples, like the Santa Maria del Mar and the Santa Maria del Pi, both churches in Barcelona, and the Cathedral of Gerona (the widest gothic nave in Europe). 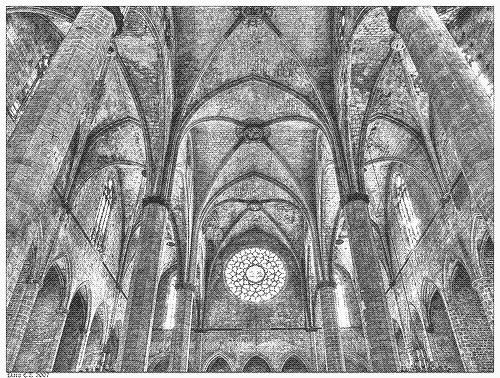 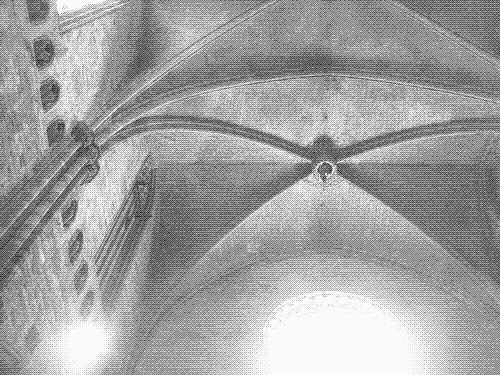 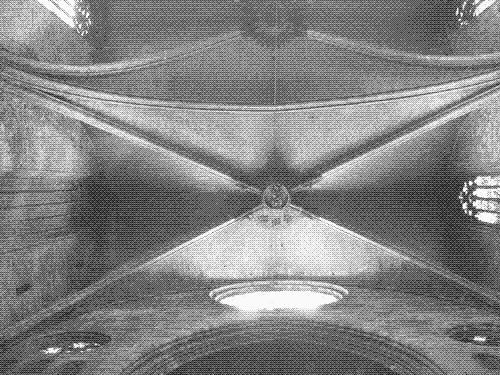 Image: Timbrel vaulting in the Cathedral of Girona.

At the end of 19th and the beginning of the 20th century, the timbrel vault was rediscovered by the Catalonian architects of the Modernisme movement. Some striking examples are the crypt of the Colonia Guell, which Antoni Gaudí designed in a very low-tech fashion by hanging ropes and weights from the ceiling (the building has now suffered a disastrous restoration), the Aymerich Amat i Jover in Terrassa, a textile factory built by Lluís Moncunill i Parellada, or the Celler Cooperatiu de Pinell de Brai by Cèsar Martinell. 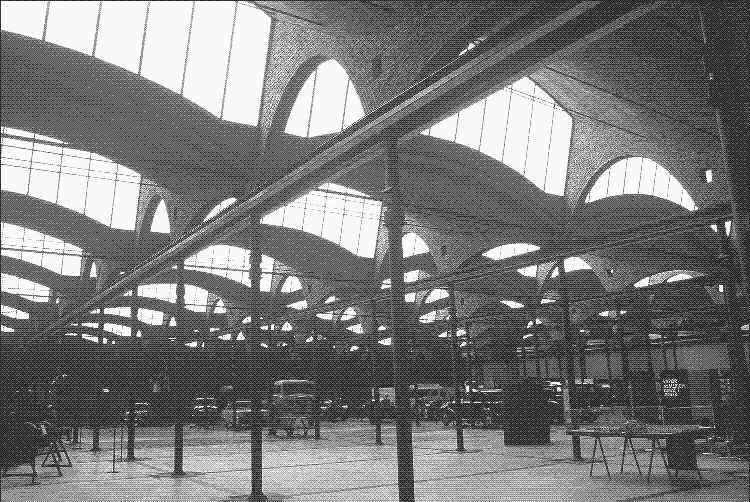 Image: The Aymerich Amat i Jover in Terrassa, a textile factory built by Lluís Moncunill i Parellada. 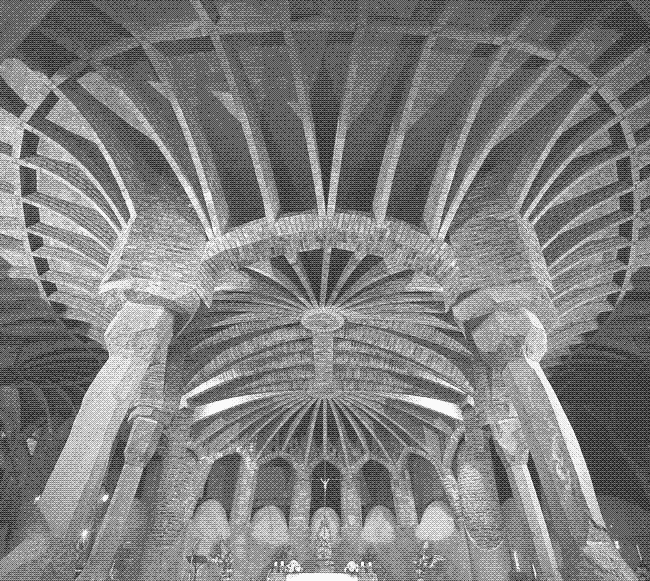 Image: The crypt of the Colonia Guell by Antoni Gaudí. 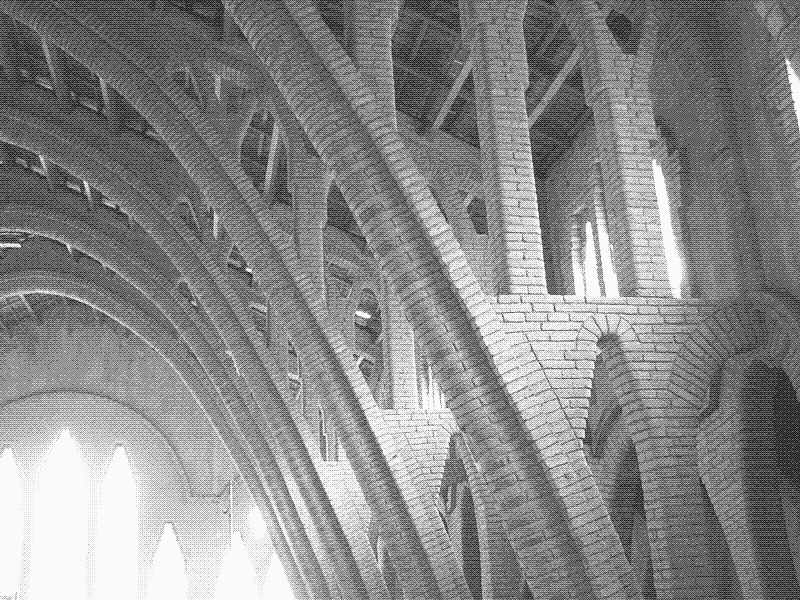 Most masterpieces of catalan vaulting, however, are in the United States. The method was previously unknown in the Americas, until a family by the name of Guastavinos imported it. Rafael Guastavino, born in Valencia in 1842, improved the centuries-old technique and renamed it “cohesive construction”. He substituted bricks with thin tiles and the traditional mortar with rapidly hardening Portland cement, which enabled him to build vaults 3 to 5 times wider than the typical size of traditional timbrel arching.

Early in his career, around 1880, Guastavino immigrated to the US. There, he and his successors collaborated for more than half a century with architects on the construction of more than 1,000 buildings and structures, many of them renowned monuments today. Nearly 400 of them are located in New York. The Guastavinos made masonry floors, ceilings, vaults, domes and stairs. Their accomplishments were fairly unknown to the general public as they were working as contractors and not as architects. 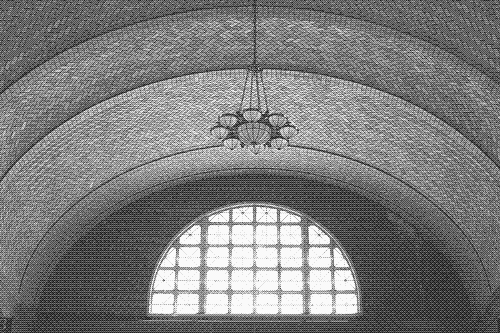 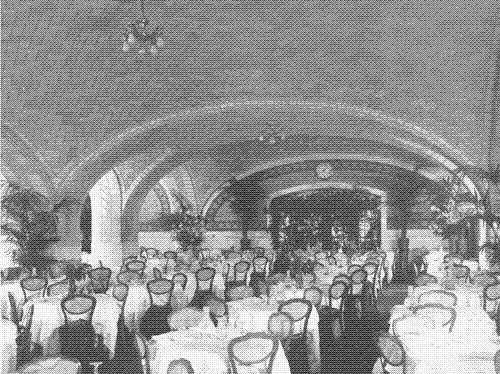 Image: The ceiling of the Oyster Bar in Grand Central Terminal. 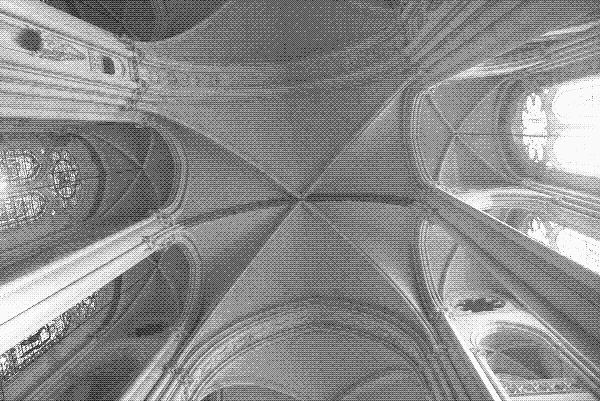 Image: The Cathedral of St. John the Divine.

Some examples of the Guastavinos’ work are the Boston Public Library (a well documented project), the ceiling of the Oyster Bar in Grand Central Terminal, the reception hall of Ellis Island, Carnegie Hall, the US Supreme Court Building, the Nebraska State Capitol, the Queensboro bridge, the US Army War College in Washington and the Cathedral of St. John the Divine (which has the largest Guastavino dome ever built).

Rafael Guastavino and his son (also named Rafael) were granted more than 20 patents and by 1891 the company had offices in New York, Boston, Providence, Milwaukee and Chicago. In 1900 they opened their own factory to manufacture the tiles.

The popularity of the timbrel vault was not restricted to its aesthetic appeal. It was simply a very fast and economical method, for two reasons. Firstly, and logically, much less building material was required. Secondly, there was no need for wooden scaffolding. Building a Roman vault demands large amounts of wood, as every arch is required to be supported by a wooden centering for a long period after initial construction. 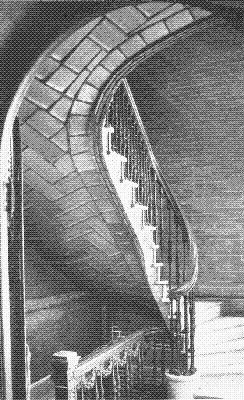 Image: A staircase based on timbrel vaulting. 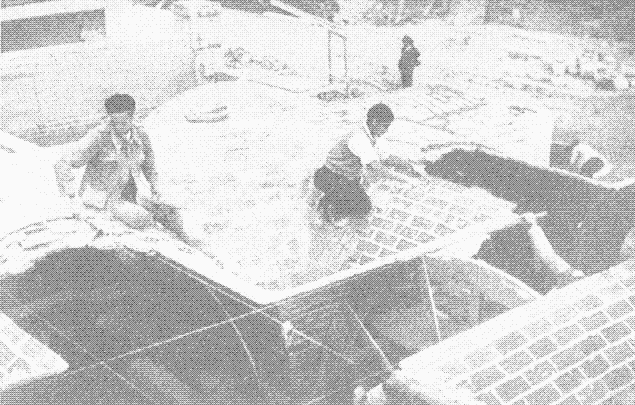 The masonry vault, on the other hand, is self-supporting apart from some temporarily required, light shiftable formwork at the beginning of the job. While constructing a timbrel vault, workers simply stood on the work of the day before (which was two to four inches thick).

These huge savings in both building materials and construction equipment meant that the Guastavinos could offer much lower prices than their competitors.

Cohesive construction also made buildings fire-proof (an example of this is the Santa Maria del Mar in Barcelona, which burned for 11 days during the Spanish Civil War, without collapsing or too much damage). There have been some major city fires during the 19th century (like the great Chicago fire in 1871), and the Guastavinos aptly saw the marketing potential: they soon renamed themselves the “Guastavino Fireproof Construction Company”. 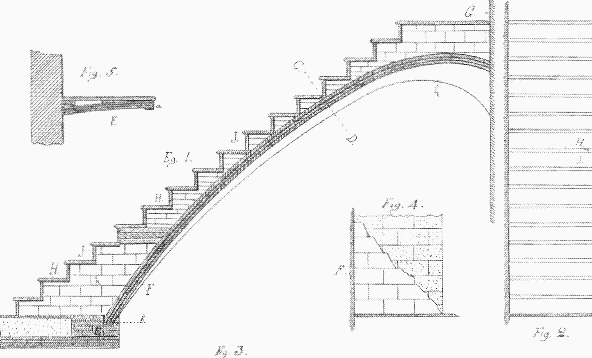 Image: Timbrel vaulting in a staircase.

There were more advantages to the construction. The floors, ceilings, arches and stairs were sound-insulating and resistant to floods, dampness and the lodgement of pests such as rats and roaches.

Cohesive construction also proved to be very durable. During the restoration of Ellis Island in the 1980s, only 17 of almost 29,000 tiles had to be replaced. And of course, several churches are living proof of the achievements of timbrel vaulting in the Middle Ages. 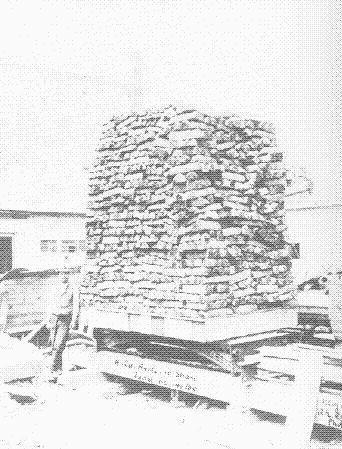 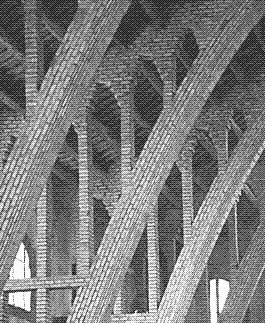 The Guastavinos initially had a hard time convincing the public that their ultra-thin and ultra-light arches were strong and safe. To persuade their buyers, the technique was demonstrated in public (see picture right).

In many ways, timbrel vaulting offered similar properties to reinforced concrete, but without the use of steel. It was achieved without computers or engineering calculations, relying instead on intuition and practice.

According to Rafael Guastavino, the masonry vault would become the main construction material of the future. He proved to be wrong. The Guastavinos firm closed in 1962, twelve years after his son died. Rising labour costs and the arrival of steel and concrete building methods rendered the technique virtually obsolete. Still, two later examples deserve attention.

One was the Uruguayan architect Eladio Dieste, who applied the timbrel vault to modern buildings (also including steel reinforcements, which made it possible to build to wider breadths, this church in Atlándida being an example). 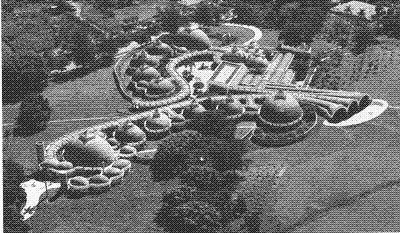 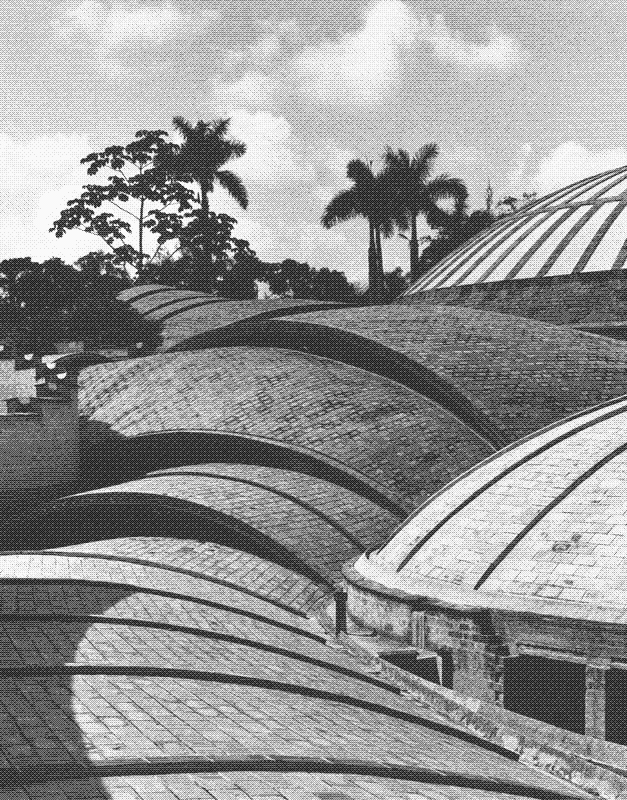 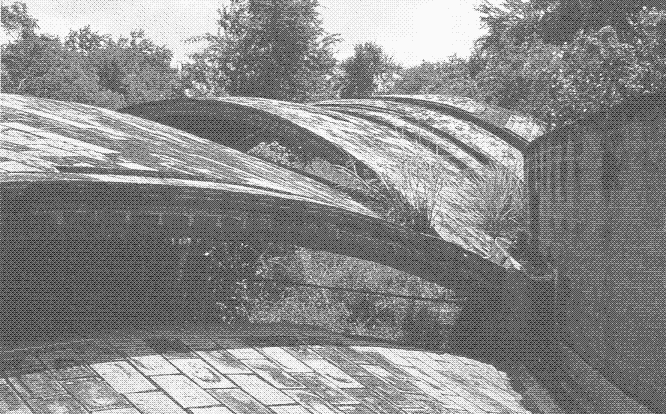 Most notable, and most relevant, are Cuba’s art schools, an unfinished project that was commenced from 1961 to 1965. The ambitious plan forsaw a national complex of art schools. As building materials were scarce, and labour was plentiful, timbrel vaulting was applied. The knowledge was delivered by a former mason of Antoni Gaudí.

Scarcity of materials is still an issue in Cuba, and it is increasingly becoming an issue for the whole world. Masonry vaults may just come in handy again, one day.

Recently there has been more research on the structural behavior of this construction system and some people, for instance at the MIT, also try to revive the technique by practice, which has resulted in several do-it-yourself timbrel vaults (see below). MIT and the Boston Public Library plan to organise an exhibition on the Guastavinos in 2009.